I can honestly say I have been waiting to work on these sets for a full year now, and that there was nothing small about them. A Hefty show required some Hefty sets, I remember when the Wichita Theatre posted on Facebook that they had gotten the rights to do the show in 2011 that was in August of 2010. I knew I was going to audition (later to land the role of Mr.Pinky ), but then in January God blessed me with becoming the official Set Dresser for the Wichita Theatre.  Another thing I can honestly say, is that I have been collecting great pieces for at least six months in preparation of this show, as you will see!


The Living room has been by far my favorite set, in fact the whole stage right portion is my favorite part to look at. I swore to myself when I started that the sets would be mentioned in the news paper, and for that they would have to be picture perfect. 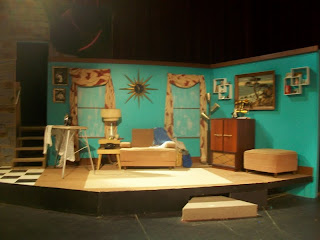 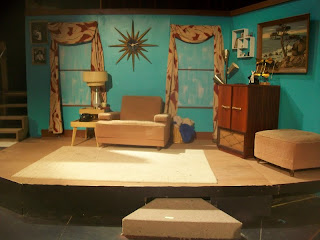 You might notice quite a few things on loan from the Casablanca,  I went to every imaginable detail to make this look like an authentic late 50's early 60's living room. The best pieces (I think are the coral pink chair I snagged for a steal, the lamp I got in Kansas, the little blonde fountain table next to the chair, and the large ocean picture Missouri Michael gave to us for the set! 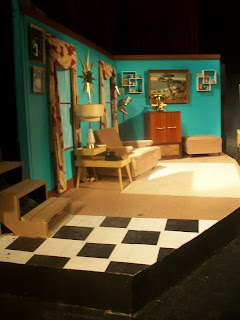 One of the little touches I loved doing, was making the "checkerboard" foyer to the stairs, to contrast the brown wood floor of the living room. 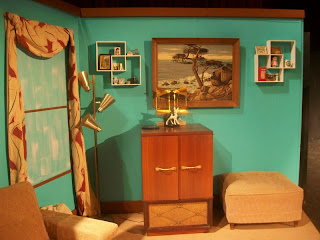 Like i've said its the details that make this part of the set, the palm print barcloth curtains, my 1953 TV set, the shadow boxes, the staggered lamp, right down to the TV Antenna! 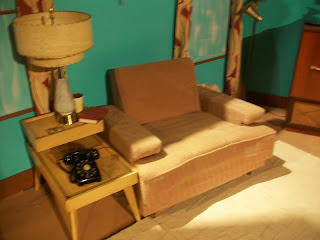 The pink chair with matching ottoman lays down to make a twin bed, and of course a rotary dial on the telephone! I can't tell you how many Patrons I have tell me after the show "We had that in our living room!" or "I remember my Grand Mother having one just like that in her house!" about all the things in this corner of the set. 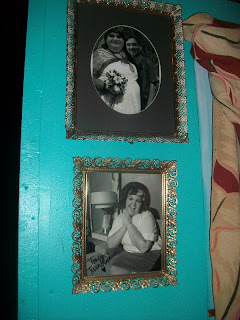 ( Whats a family home, without family portraits! )
You see this part of the set is actually a "cutaway" into the walls of the Turnblads second story apartment.  To give it the illusion of being higher up a one foot high platform was built for the "floor" of the living room.

The Exterior of the building I knew I was going to use a Baltimore icon, its been called "The polyester of Architecture world" Formstone!
I had originally wanted to do every building onstage with this style, but managment beleived it would be to time consuming. Im so glad we were able to do this on at least one building as it is so iconic and fabulously tacky that its cool! 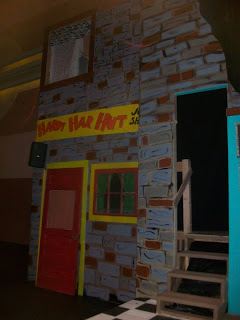 We had quite a time painting this Formstone, its not hard to do but there is a pattern too it. The tallest problem we encountered was that instead of being able to paint the Formstone on the walls (while still on the ground) some one had hung the bare panels up and they would have to be painted in the air. I painted as high as I could on ground and ladder, and then tired fearless team members Mary and Katie saved the day! They scaled the 20 foot ladders and painted Formstone where no one else could reach. 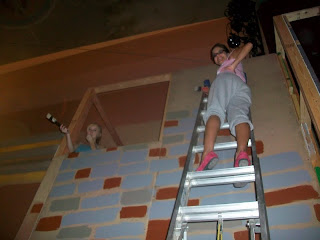 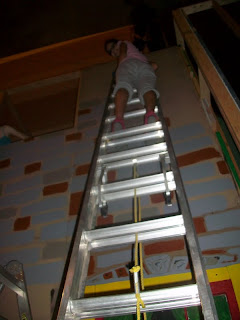 (20 feet up in the air)
It took just about six hours to paint all the Formstone on the two story facade, go back and detail/ shadow them, and get the remaining panels hung up. The finished result however makes me giddy when I look at it! That might seem like a labor intensive amount of time, but its really not in the two week time period we have to do everything. The exterior of two story building is attached to the cutaway living room and is the "Hardy Har Hut" and makes up the Turnblad Home.  Now comes my favorite part of the process, seeing the sketches become reality is always thrilling to me! 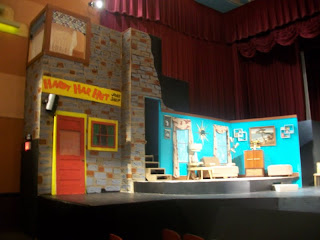 "The Tower" (as we have affectionately named it) Is the seconds story bedroom window that Tracy first appears in during the opening number of the show "Good Morning Baltimore", and later serves as a perch for the girl group "The Dynamites"  to sing and sway in! It's earned its name because its a towering 20 feet off the ground, complete with winding interior staircase. 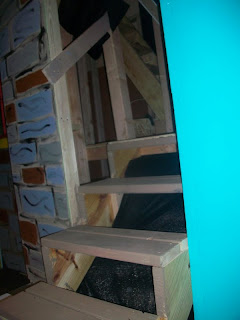 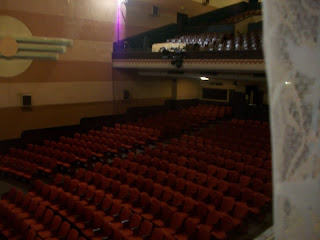 (The view from Tracy's tower "bedroom" )
The Corny Collins Set, I based off a picture of a TV one of our fellow mid century loving bloggers The Haunted Lamp and one his vintage TV trays. 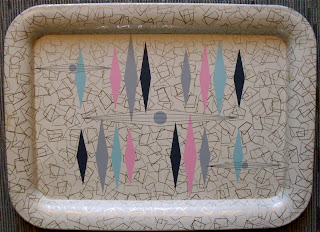 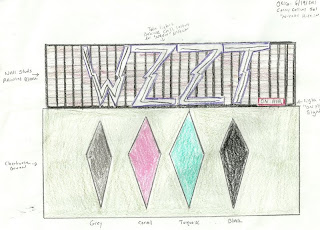 (First rough sketch of the studio) 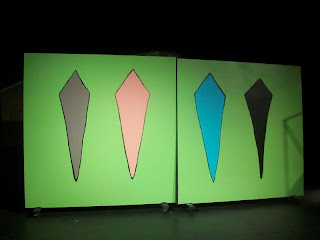 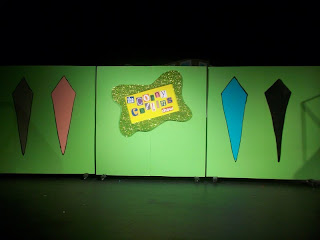 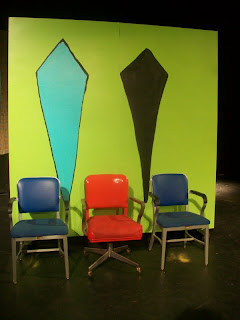 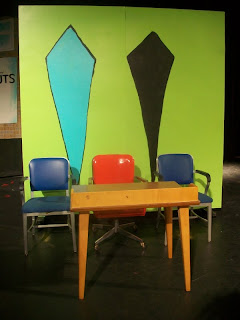 Mr Pinky's Hefty Hideaway house of fashion for the ample woman! Friend (and Co-captain of the Set team) Joe painted the interior walls of the Hefty Hideaway, and I made the dressing room door with a split sheet dyed pink, some cream silk curtains and a few swags. With addition of the clothes wracks outfitted with vintage 60's dresses! 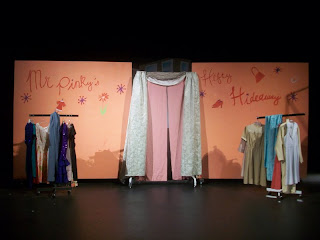 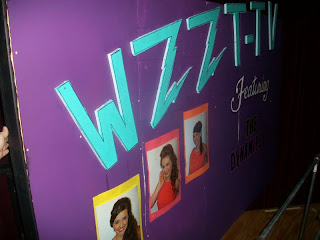 The Dynamites Billboard stands eight feet in the air and was designed and painted by friend Chloe! 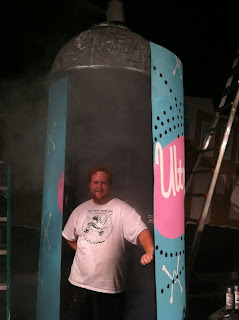 (Ta-da!)
Special thanks to friend Utah who build this massive hairspray can that Tracy's mother bursts out of at shows end the PVC pipe prison bars, along with tally board for the Miss Hairspray Contest.
OF COURSE a huge thanks to my ever growing set dressing team, I adore working with them and they are just so great! They take time  to help me keep my sanity paint, decorate, or just listen to me complain while we work away. Also a thanks to the countless other people who helped get the set in show shape!

(Front row, Patricia, Myself, Sheldon, Bryson,
Middle row, Utah,  Chloe, Katie, Joseph
Back row, Mary, Terrace, & Holly...)
It's a wonder these guys and gals don't loathe me by the time opening night rolls around, I ask a lot but never more than I could do myself, and they always take it with a grin to get things done, together we've all made some pretty wonderful sets. I appreciate and value everything they do! Our hard work paid off as we were mentioned in the review which you can read right here from the local paper.
My favorite line being.... 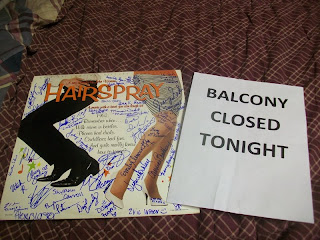 For my show record, I got the 1988 Soundtrack to the original Hairspray movie, and this paper with "Balcony Closed Tonight" on it.  You see back in the early 60's most things around here were still segregated White and Colored here in North Texas. The Wichita Theater (like many others) did not allow Black's in the house floor, their tickets had to be purchased outside and then had to use a different entrance that led straight up to the balcony of the theater.  In later years this has kept people away from the Theater because of the vivid memories they had of those times. The message is equality and the mantra of the show Hairspray is...


"Tomorrow is a brand new day, and it don't know White from Black..."
So for opening night of this ground breaking show the Director Lynn Marshall made sure the Balcony was totally closed off to patrons of all race, to "show future generations where we have been and where we must never go again."

What a powerful, deserving message, and a little piece of history to have.

I had a class... What was it called? Anyway, I did set design drawings like yours. Wow, you really make them happen!!

Oh my goodness, that looks like so much fun! Nice job!