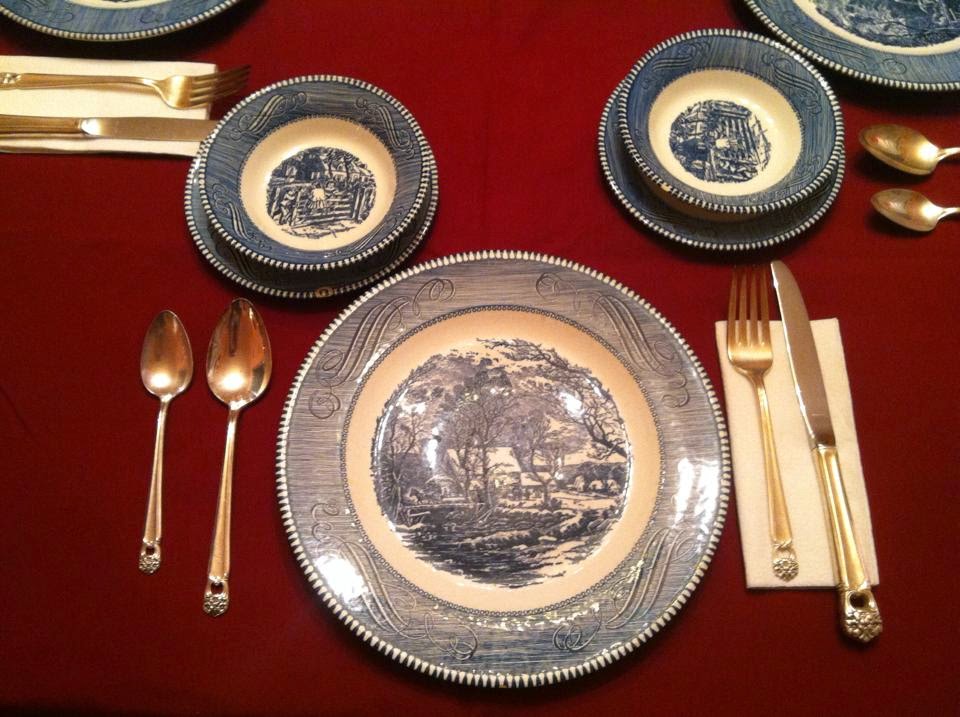 Have a Happy Holiday! 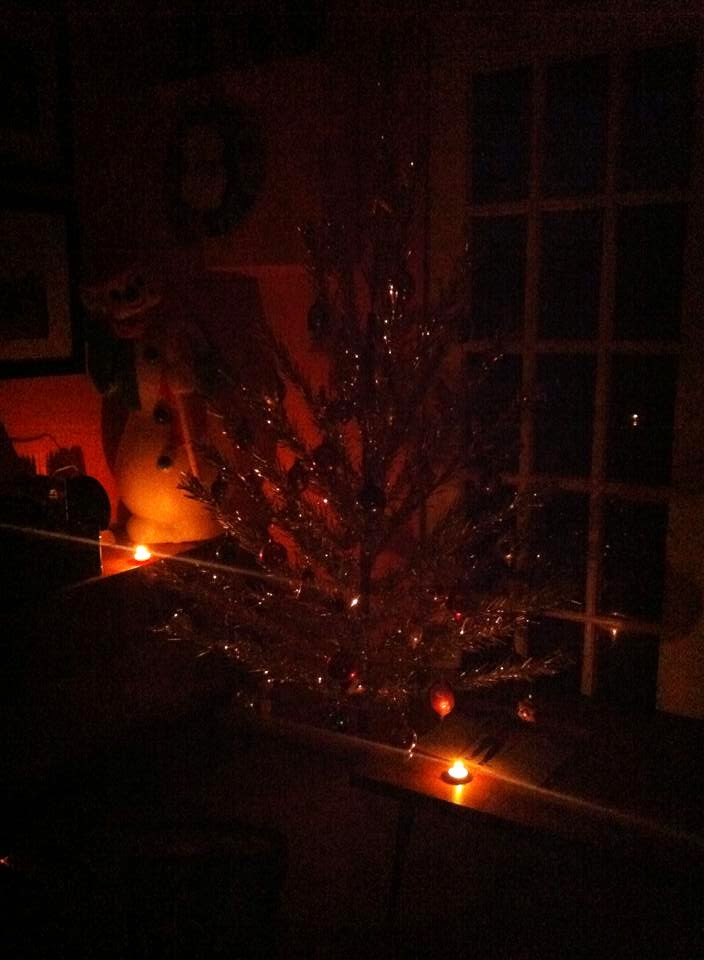 I hope the picture above comes out as pretty as it was on Saturday night. It was QUITE the weekend for weather out at the Casablanca. Much needed pouring rain, two inches worth! 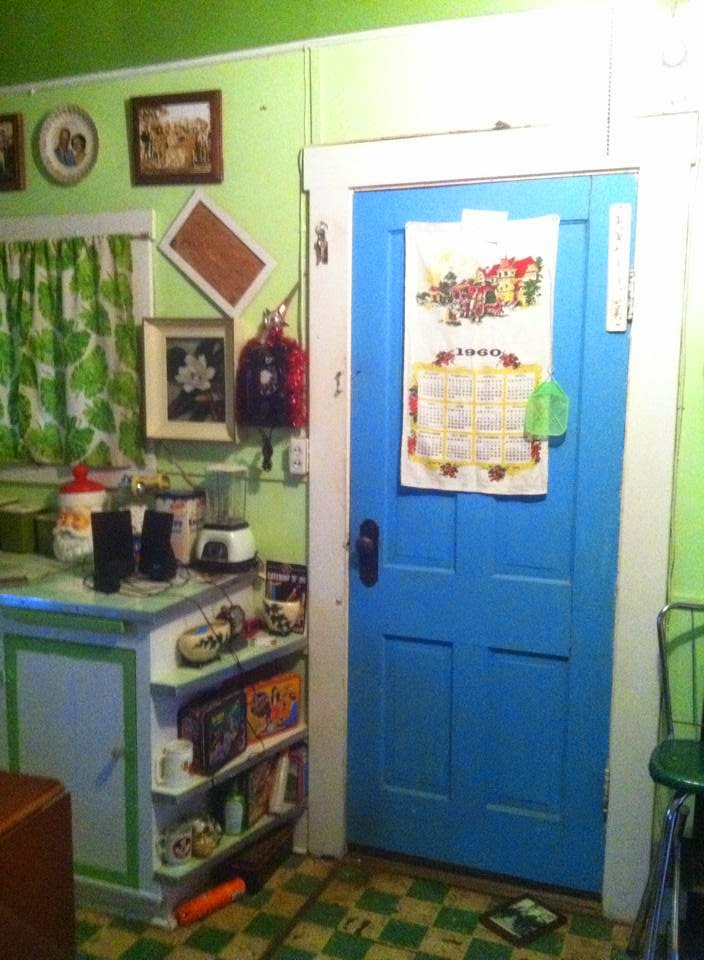 I had the BEJESUS scared out of me just after I arrived. The rain had been pouring down for about an hour and it took twice as long to drive out to the lake, there was water over the roads in several places.  I had just unlocked the front door and put groceries on the table, when I turned to step back out on to the porch and KABOOM!
I honestly thought the house had been struck by lightning. All of the pictures shook off of the kitchen wall, (I had rehung most of them before thinking to get a picture) and the dishes were rattling in the cabinets. It scared the HELL out of me! For about 30 minuets after that each time a hard bolt of lighting struck it made the dishes rattle just a little bit, but the storm was moving North and I felt safe.

Around 3:00P.M. Friend Jeremiah drove out to visit for a while, and about five minuets after, the power went out. The lake is fed electricity from a Co-op up in Altus OK, about once a year storms in Oklahoma knock the power out for about six hours. The ONLY draw back to having an "all electric" cabin is when this happens. Can't cook, can't heat the house, and that pretty much shuts everything down.  So as the storm enveloped the setting sun, we lit candles and hoped it would be back on soon. We waited until 7:30P.M. and the power still hadn't come on.  I called the Co-op and they said the workmen were having to dry out 10 miles worth of line to find the problem... So finally after five hours with no electricity, we gave up and came to town.

The candle light gave an enchanting glow to the Aluminum Christmas tree, had it not been an inconvenience it would have been pretty neat.

Haha Oh well, these thing happen and the power was back on by Sunday!

Hope you all had a good weekend! 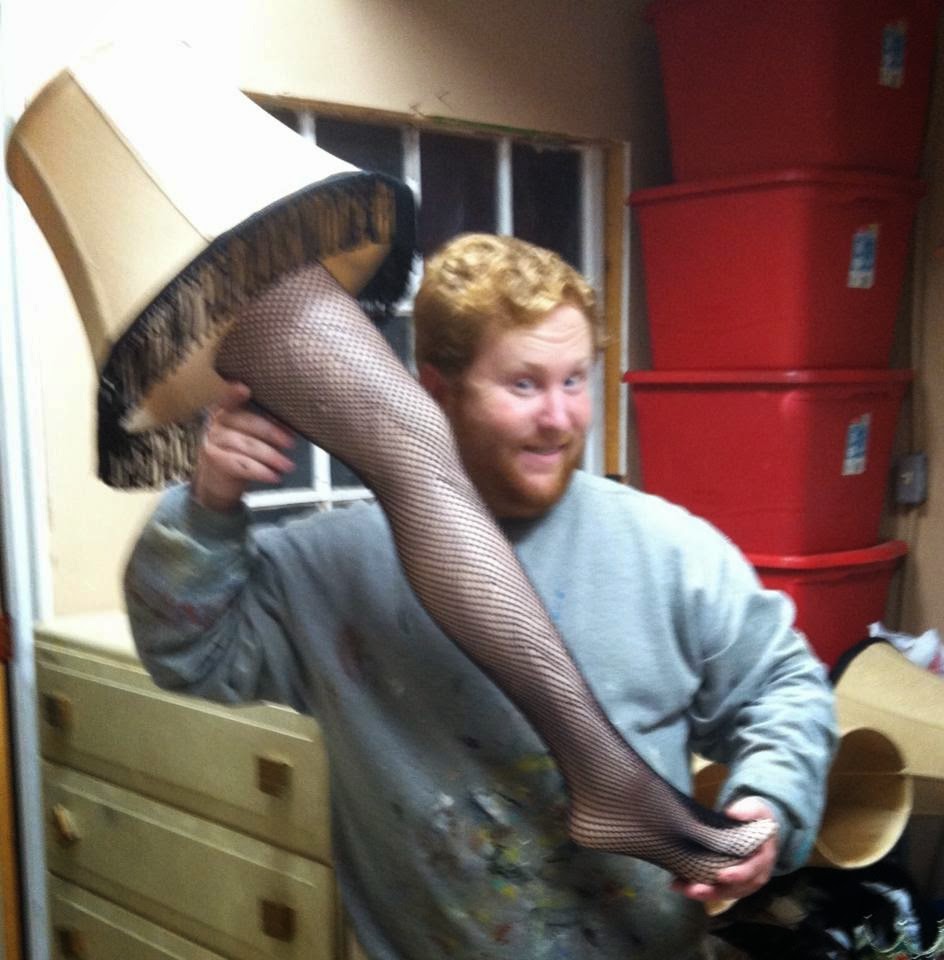 An "Eye-talian" award, why it might be an entire bowling alley...

Thank goodness Tech Week for "A Christmas Story" at the Wichita Theatre is almost over!

If Only It Had a Twin! 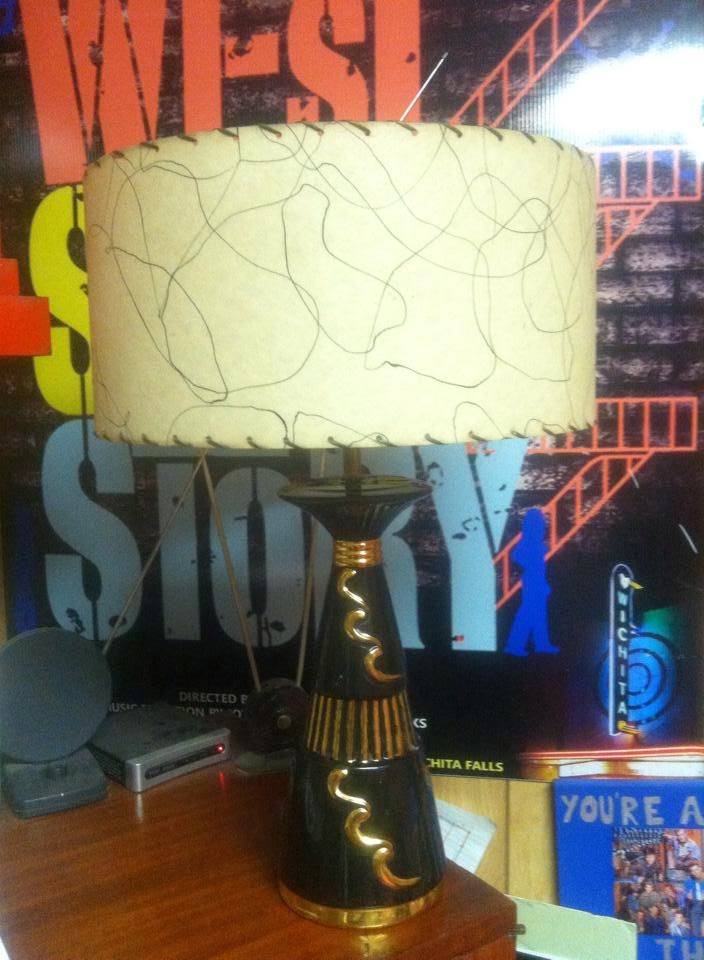 $5.43 at Goodwill, a happy and most welcome pick me up to an otherwise crappy Friday! 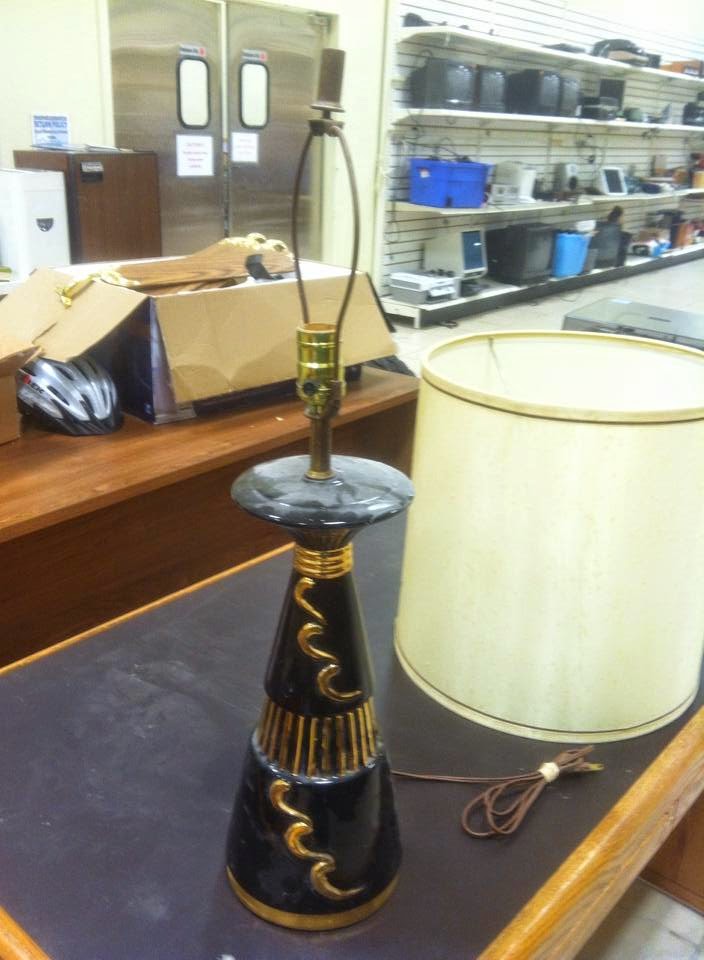 This lamp had a different shade on it, but I had the perfect fiberglass 1950's one at home!

I love the way it looks now! 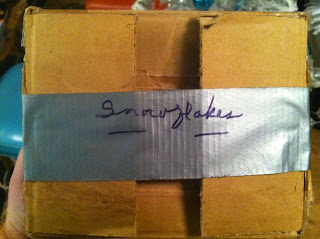 "Out of the bottom of the Air,
Out of the cloud-folds of
her garments shaken,
Over the woodlands brown and bare,
Over the harvest-fields forsaken,
Silent, and soft, and slow
Descends the snow.

Even as our cloudy fancies take
Suddenly shape in some divine expression,
Even as the troubled heart doth make
In the white countenance confession,
The troubled sky reveals the grief it feels.

This is the poem of the air,
Slowly in silent syllables recorded;
This is the secret of despair,
Long in its cloudy bosom hoarded,
Now whispered and revealed
To the wood and field."

One of the struggles of decorating for Christmas, has been seeing my Grandmothers handwriting on everything. 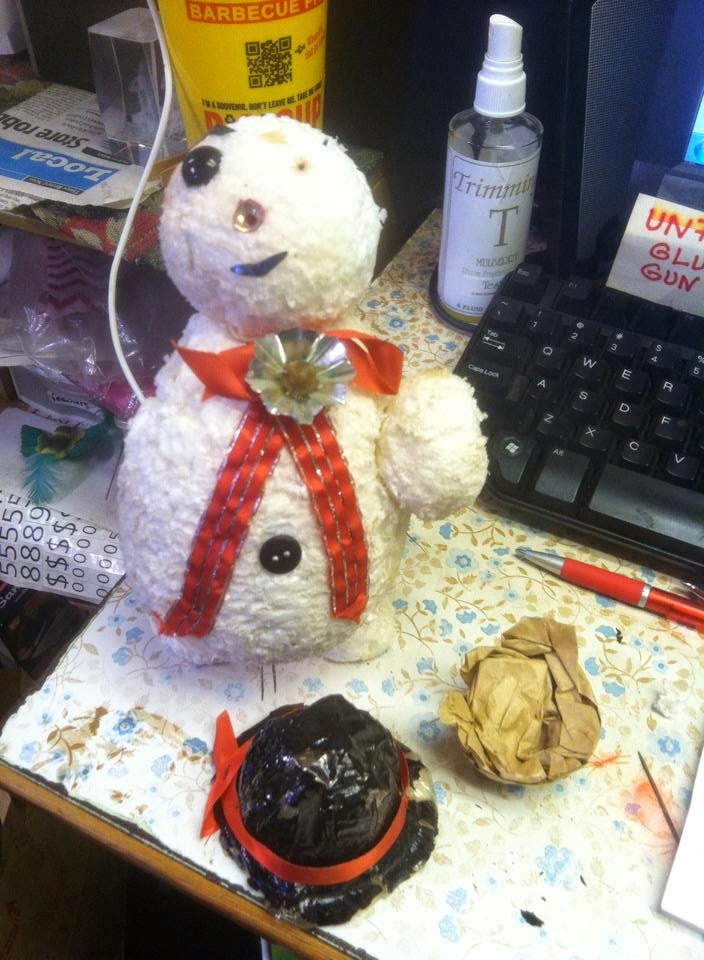 Not to be confused with his distant cousin Frosty the Snowman, Frankie's story is truly a "rags to riches" tale dear Readers. Frankie is one of the many handicraft Christmas decorations that my Grandmother Jordan made long ago. She always used to talk about this Styrofoam Snowman, but we never could find him. It wasn't until we cleaned out her estate that we found him out in the barn. Frankie was in perfect condition... until my Dad drove off with the box he was in on the back of his truck. That is what rendered him to his current state. 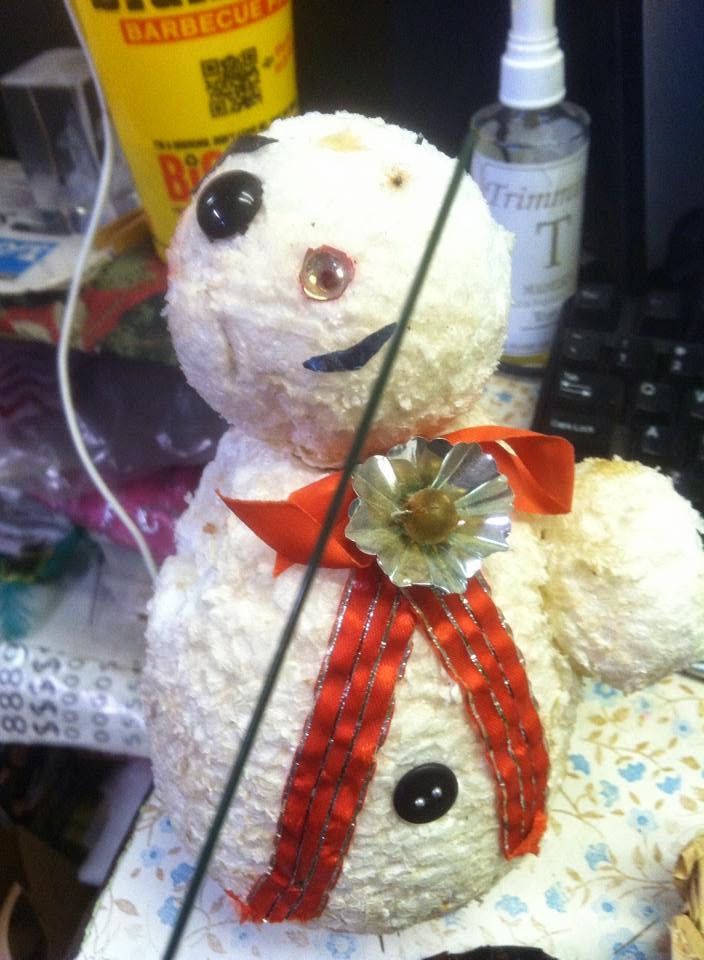 In the fall, he lost an arm, his nose, his hat was damaged, and neck was broken. So to begin Frankie's restoration, I used some heavy floral wire to give him a new strong spine. 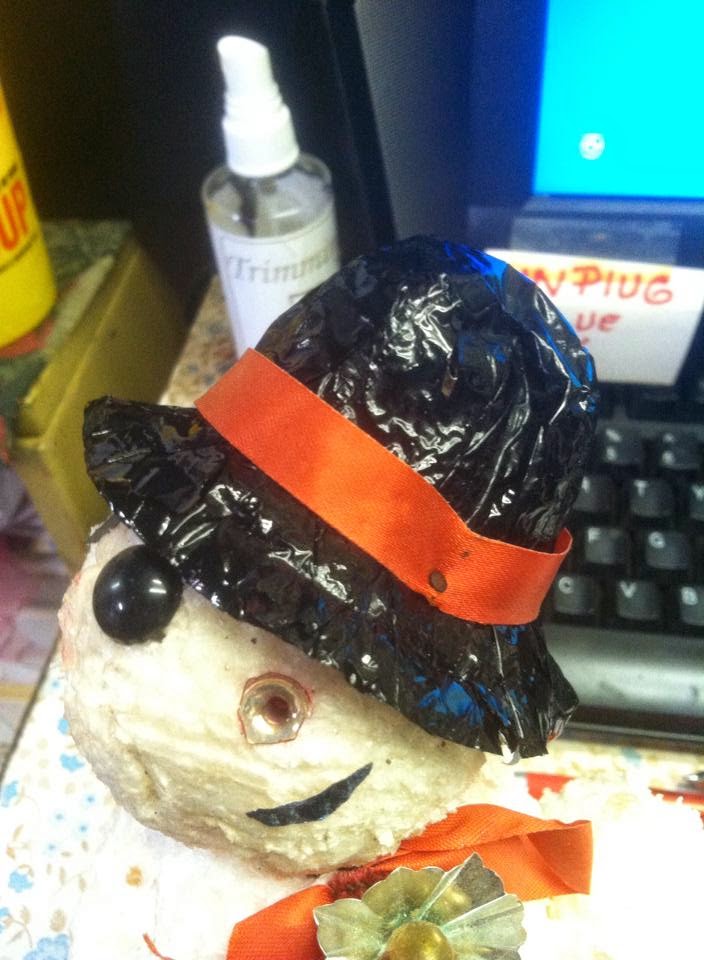 The hat was repaired, and received a fresh coat of black paint. He was already looking much happier!
Since there was no way to perfectly replicate another arm, I made two new "snow ball" arms out of Styrofoam Easter eggs that I crushed and molded until they were the same shape as the old arms. 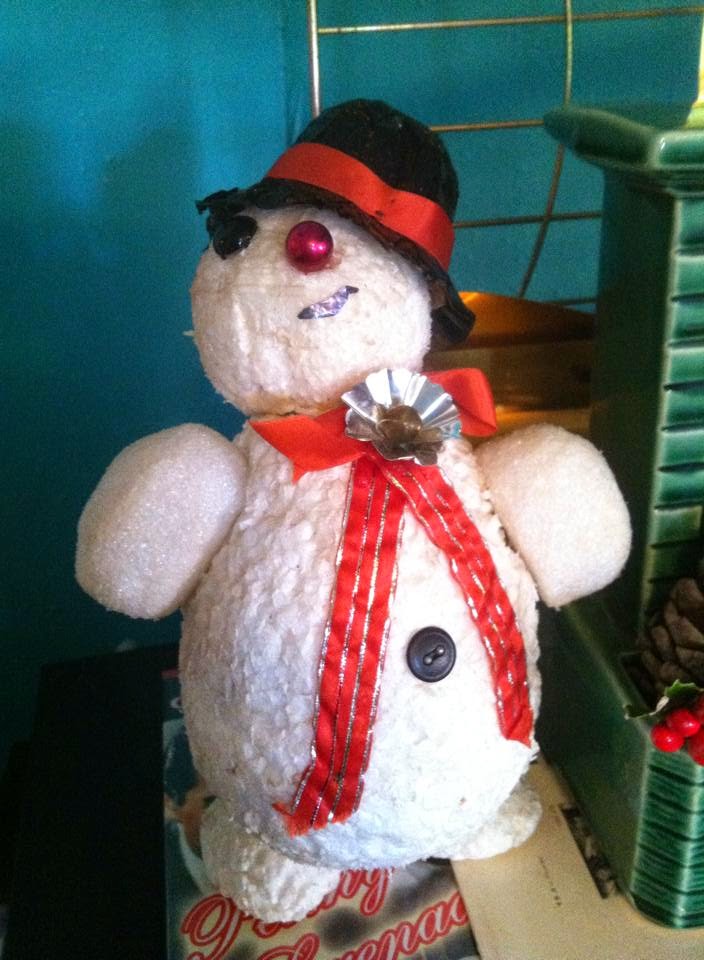 To make the new styrafoam blend in with the old aged parts, I brewed a cup of dark coffee and dunked the pieces a few times until they matched. 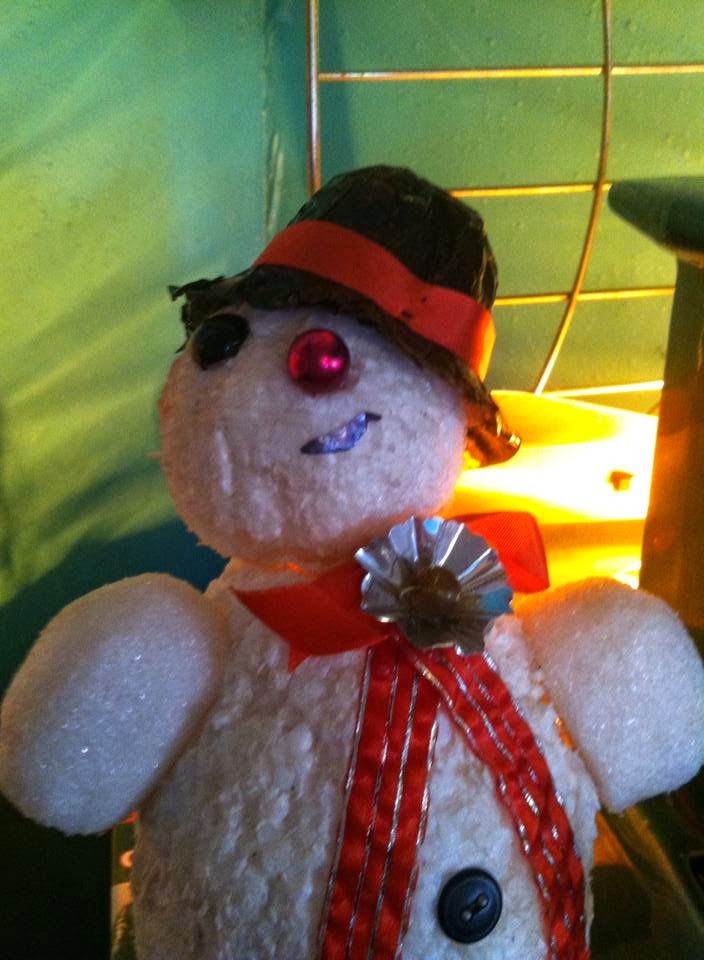 (Almost as good as new!)
Just by luck I found the same box of ornaments for the red nose that my Grandmother provably used the first time she put this together! So all was mended and right again. 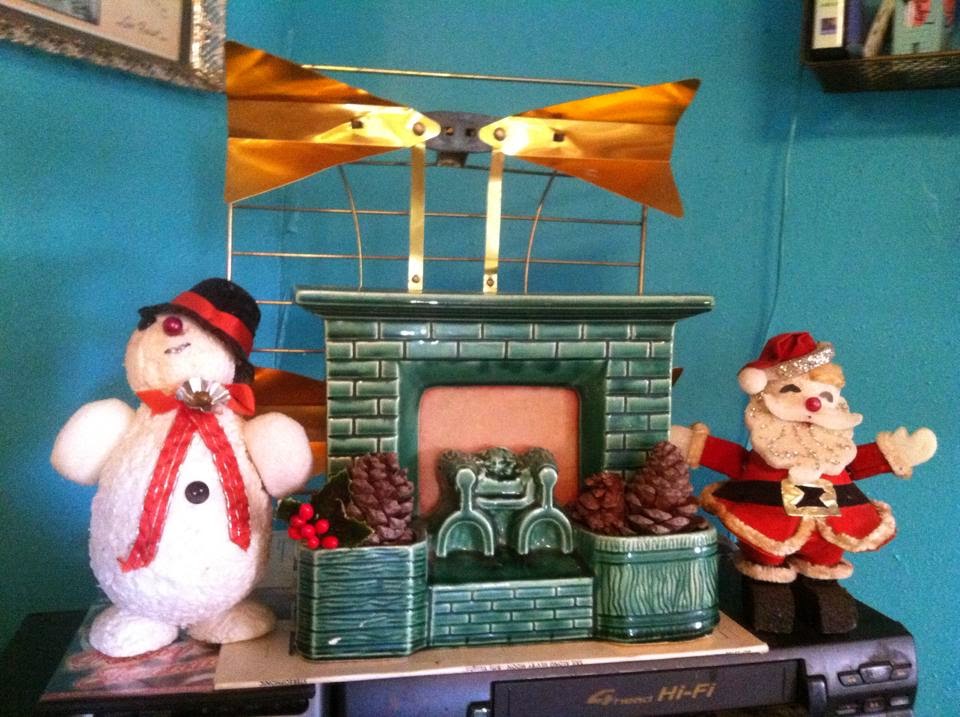 Frankie reunited with the Santa Claus my Grandmother also made! They both look great on top of the TV set, flanking my fireplace TV lamp! 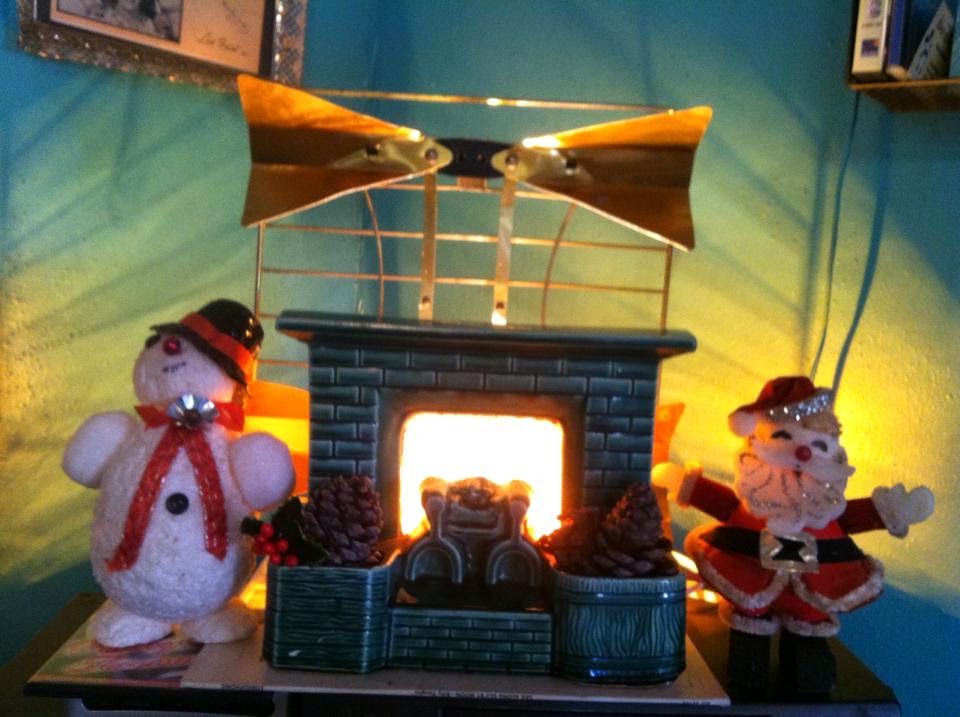 With a roaring "fire" in the fireplace, these two look like they are home for the Holidays!

You might be wondering why this particular Snowman is named "Frankie" vs "Frosty"? Well, that was a simple decision... have you ever seen a Snowman with his fedora tipped over one eye and nursing a red nose? Haha if he could, I bet he'd croon with the rest of the Christmas Rat Pack!

And don't judge my Christmas decorations already being put out! This year there is only a week between Thanksgiving and Thanksmass, that paired with a show going up soon, it's better I start putting up decorations now vs in a mad rush later!

Any of you put things out early?! 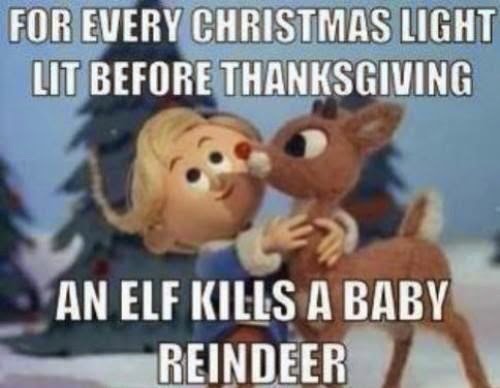 I bet the hills of the North Pole are stained with red... 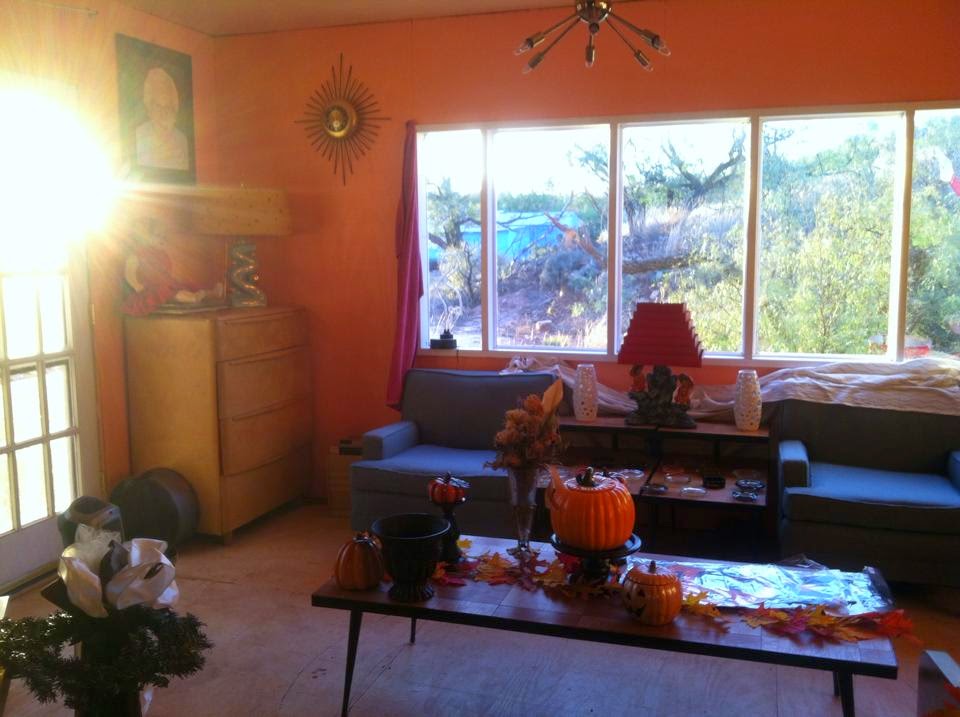 This weekend at Lake Diversion, I like to imagine is similar to Labor Day weekend in the South Hamptons. People out for one last hurrah before the "season" is over. The summer visitors, and weekenders close up their cabins and empty their water tanks in preparation for the winter months ahead. 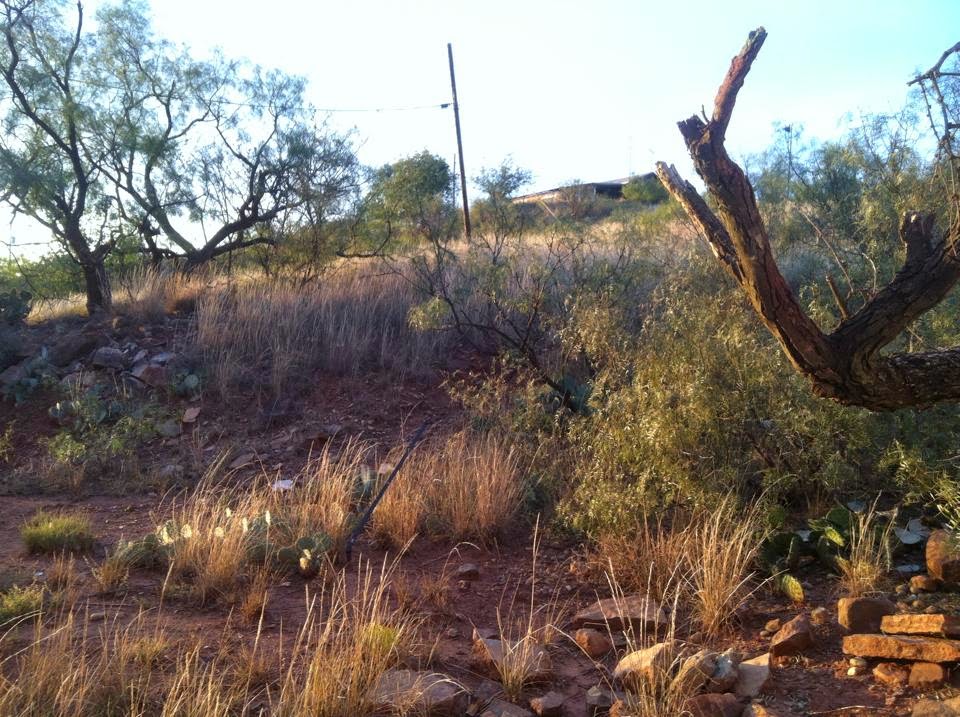 Casablanca technically does not "close" but it does take a rest between January and March before the years new "social season" begins. There is always something slightly sad about this time of year, the land becomes barren and for most trips to the lake cease until next April. 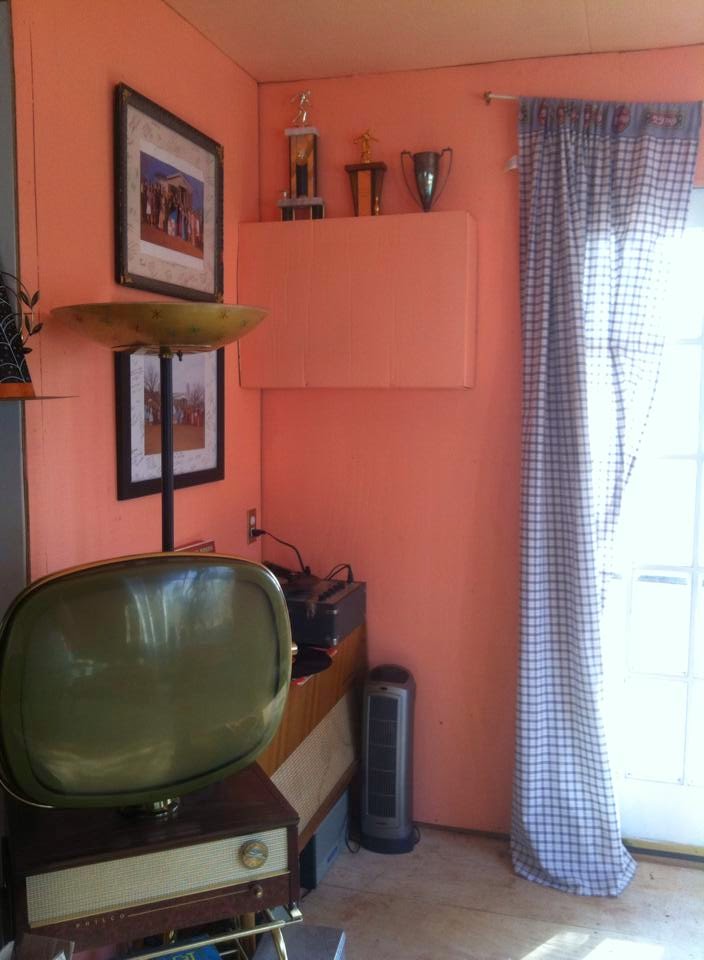 (Is my air conditioner cover to conspicuous?)
This weekend one could really feel the change in seasons, as we took down most of the Halloween decorations and began preparing the house for winter.  This year we will be having Thanksmass Dinner down at the Pavilion, (which is weird to me, but there are just to many people to fit in the house.) So for a change, I wont have to completely rearrange the house. I decided to put one of my 6ft Aluminum Christmas trees in this corner and made a cover for the A/C unit out of a cardboard box and painted it coral to match the wall. Hopefully it wont stick out to much once the tree is in front of it. 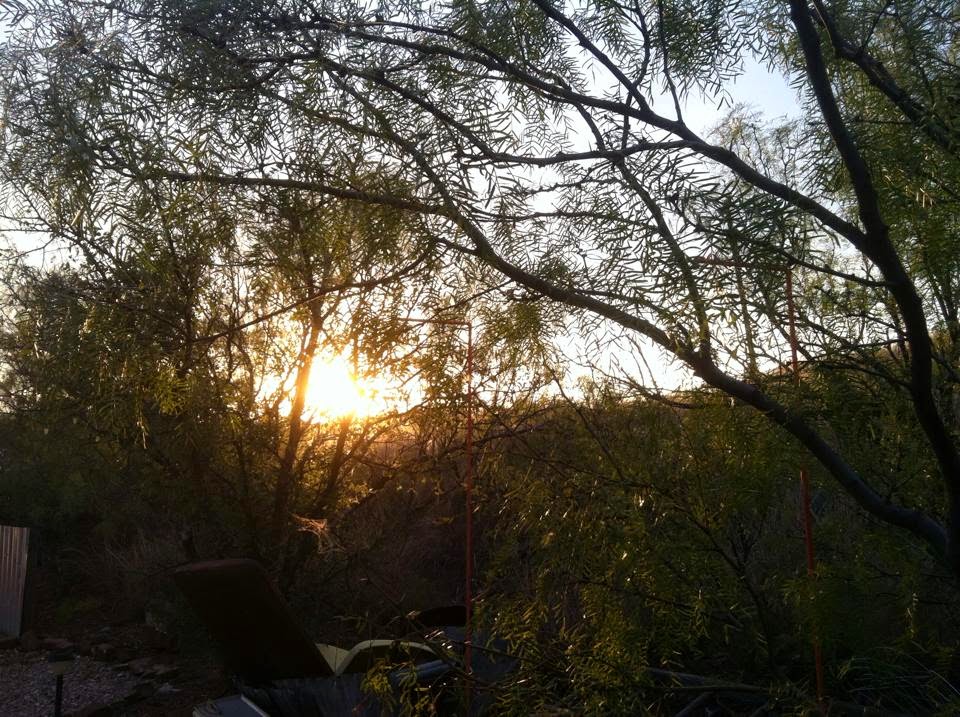 Well as Fall gives way to Winter, you all know I have Thanksmass on the brain!