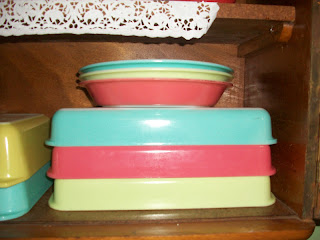 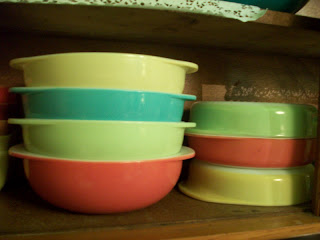 (So close to finishing three different sets of Pyrex!)
*  *  *
Well Readers, it was the "Home Improvement Weekend from Hell" but a lot has been going on at the Casablanca in prep for the 2012 social season. One of the biggest projects was fixing the west end of the Kitchen floor. A floor joist had started bowing out and was starting to lay over, which is no good for the floor boards resting on it. 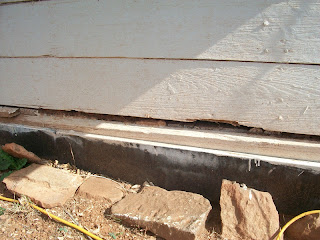 (See the boards resting inside the crack at the bottom?) 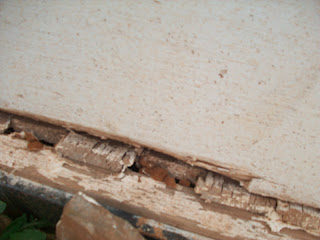 (Yeah, that stuffs not good...)
It took Dad and I about three hours to jack up the side of the house and replace the crumbling stone with cinder blocks, so that now the floor joist rests on them instead of bowing outward. It was tough work digging dirt and rocks out from under the house, but it was worth it! Now the kitchen floor is sturdy, and safe. I was running around in circles, if I wasn't touching up paint in the living room, I was picking up sticks out in the yard. With all the other projects I had going on the house was, well... 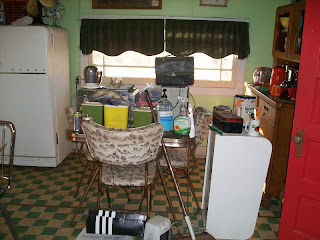 (Needless to say it was a hot mess,with company on the way!) 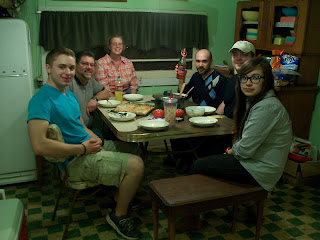 (Friends Bryson, Russ, Evelyn, Michael, Joe &Pam)
Yup a full house of close friends for an Italian dinner! As Evelyn, Joe and Michael arrived was just about the time I was discovering that a sink pipe had broken and the drain was running water into the wall. Thankfully Dad kept a cool head while I went to freaking out! After the problem was temporarily resolved (and my blood pressure came way,, WAY down) we ate heartily and and had a bit of a "nostalgic moment". While we were all sitting around chatting and eating "I Love Lucy" was playing on the TV in the Den when Joe looked up and said with a grin- "It's just like being in the 1950's, a family dinner in the 1950's."
-Mick-
Posted by Mick at 9:05 AM

I also collect all those colors and am SUPER jealous of your turquoise 024. I use the pie plates and loaf pans on a weekly basis. The colors are so cheerful! Good job on your motivation around your house last weekend. It loooks like all your hard work is definitely paying off...

D'aw, sentimental moments at the Casablanca!

Now that would have had 'Lucy' laughing....to see you guys in the Casablanca!!
Oh yes, the care of an old house...never ending but always worth the energy in the end.

Your Pyrex collection is looking fabulous! Sorry about all your old house woes, but it sounds like you're resolving everything. It's always something with an old house, isn't it...but you've gotta love 'em.

I am loving that pyrex Mick! I just can't seem to keep mine organized. Too many people doing dishes here and they just don't understand the whole color coordination thing!

It’s true that formica countertops are cheaper than the others. Their price actually depends on the edge style, pattern, backsplash and installation cost. The latest innovation on this material is replicating the look of many natural stones such as granite and marble.