"Oh the things you can think, when you think about Seuss..." (Cat in the Hat & Jojo)
﻿This show has been a trial for me, You see I am a "period set" guy, period...
None the less this show has broadened my horizons, every set piece was made from the imagination of Myself, Director Lara, and  Set dressing team! 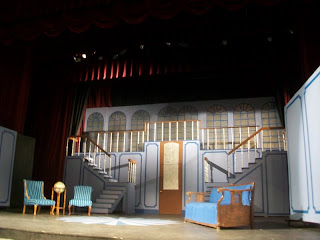 (The very last photo of the Villa Von Trapp)
For the vast world of Seuss we used lots of open space and only about four moving stages pieces, I wanted the colors to be vibrant and flow with the setting. The show has action in two distinct places, the Jungle of Nool, and the Planet "Who". 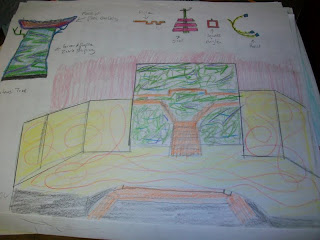 (Rough drawing of stage overview, Maize's tree, and the Who Instruments ) 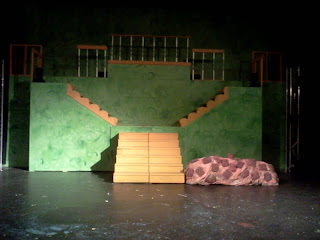 (The Jungle of Nool )
For the jungle Center stage, we created foliage effects by painting with wadded up T-shirts using a base coat of green, the slopping a darker green over the base coat and finally adding a medium green to even it out. The stairs were painted bright orange to contrast, and to be visable for exits in a black out. 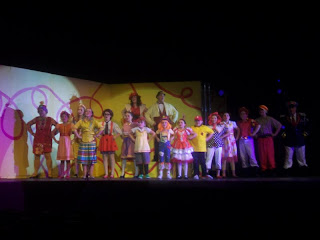 For "The Planet of Who" which flanked both sides of the stage. I used a bight yellow with red accent, Most people say it looks like someone took a giant crayon and scribbled everywhere and that's exactly what I wanted! 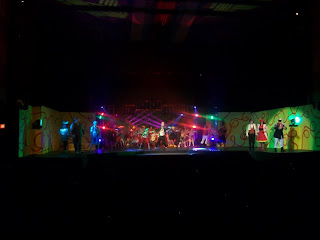 (Put it all together and Ta-da! Click to enlarge!) 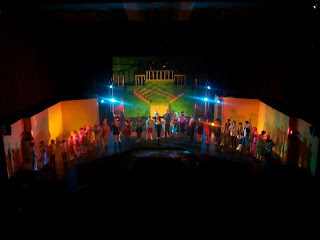 (before the red swirls were added)
The four set pieces have been so much fun to dream up and make!  The first being the red claw foot bathtub and the rolling platform it sits on. 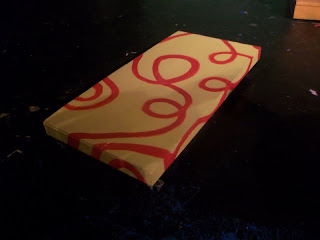 Originally the entire stage floor was to be painted with the yellow and red swirls but was changed later in production ... 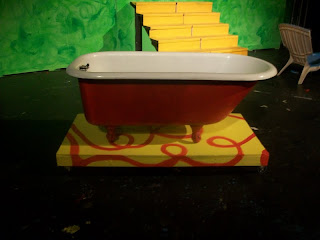 The Piano with special made curvy keys, painted a base of purple then splattered with blood red and white, The I used a sharpie marker to draw in the keys! The design comes from the Broadway production of Seussical, (with our own twist on it ) built by Nick. 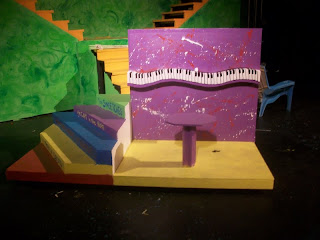 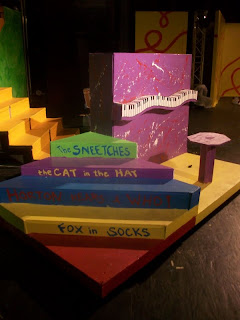 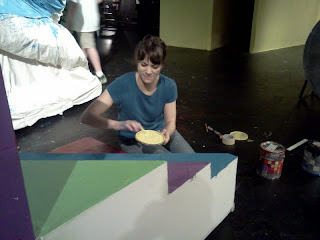 (Friend Chloe finger painted the titles of the books on the steps!)
The Tree is the home of Maize La-bird, thinking outside the box I gave it a coat of blue and then added purple and white zebra stripes! 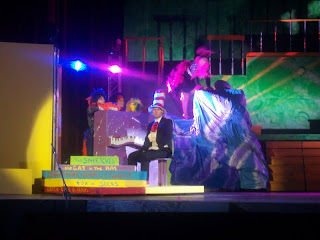 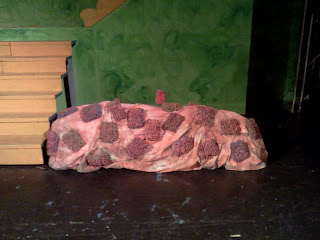 Made from muslin and quite a few funny looking sponges spray painted pink! One of the other "plant life" props included the "Pill-berry bush"... 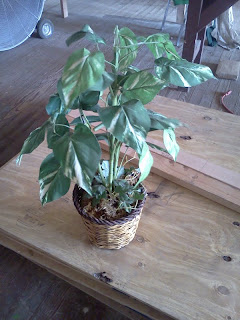 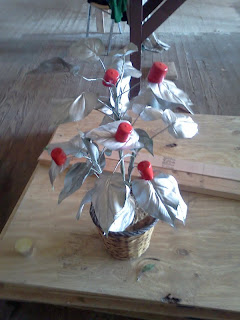 (Pill-berry bush after!)
What really makes this show, is a combination of the Lights, Costumes and Sets everyone has worked hard and its really paid off!  We got an outstanding review which you can read Here.  One of my favorite lines being...
"These tales jump to life with the brilliantly colored costumes and brightly painted sets."
But none of this would have been possible with out my Team! 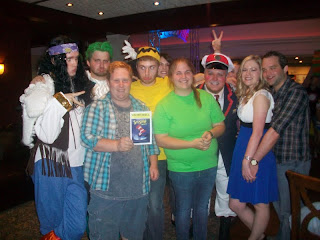 (Cameron, Sheldon, Myself, Bryson, Chloe, Jordan, Joe, Patricia, Director Lara & Spencer)
*  *  *
For my memorabilia fix for the production, I was lucky to snag a "Horton Hears A Who" Record off of Ebay. 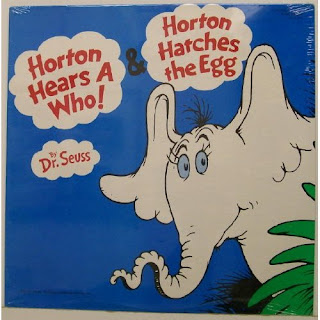 (Seussical is basically the story of Horton Hears a Who/ Horton Hatches the Egg)
All in all another smashing sucess for Myself, the Set Dressing Team and the Wichita Theater!
-Mick-
Posted by Mick at 7:19 AM

So when are you coming out here to Hollywood to do movie set design? Hmmm? :)

Honestly, you are building one super dooper portfolio for yourself!
Smart fella that you are!

Have a SUPER week, Mick !