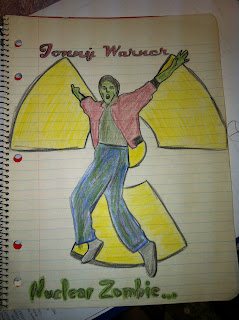 Well Readers, Show number 16!
Zombie Prom is one of my personal favorites, Backdoor Theatre put it on as a summer youth musical in 2005  and my mother wouldn't let me audition hoping that this "theater thing" was just a phase haha. Well I pined and waited and seven years later my chance finally came up to be in this hysterically funny show!  The time the 1950's (I choose they school year 1956-57) and the setting the all American "Enrico Fermi High School" (Named for the beloved father of the Atom bomb) nestled in the shadow of  "The Gary Francis Powers- Nuclear plant" (Named for the famed spy pilot!). 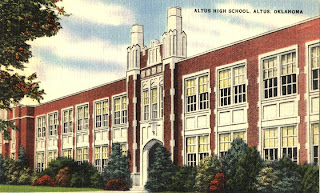 I modeled our "exterior setting" after this old postcard Altus High School, in Altus Oklahoma. I love that the stone work over the door looks like nuclear cooling towers!  All though our setting is the "Atomic 50's" unlike most productions of this show I chose to stay away from the "ultra atomic/modern" school.  As the show opens there is a line about "having our ninth annual science fair", if you do historic math 1957 - 9 = 1948. So the School building would be built and modeled differently that it would have been if it were brand new in 1957. The Set was supposed to resemble an interior hallway of a high school. 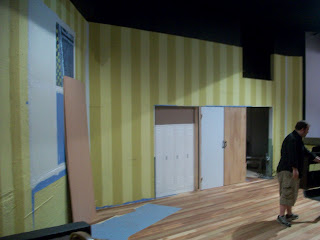 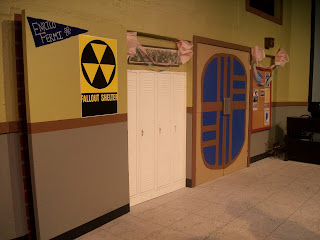 (After, Enrico Fermi High- circa 1957)
This show was on a smaller stage, so I went with "less is more", the actors and songs are really what brings this show to life. 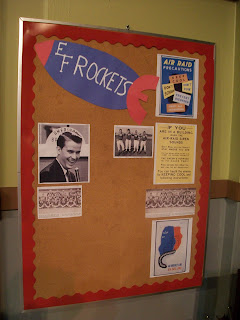 (Hallway bulletin board)
For our sports team, we came up with "The Enrico Fermi Rockets", for our school colors I choose Burgundy and Navy blue (for/from our letter sweaters). I also neatly added Air Raid warning signs as the threat of attack is eminent. Later int he show a sign up sheet for student council and an ad for the local drive-In movie theater are also added to the board. 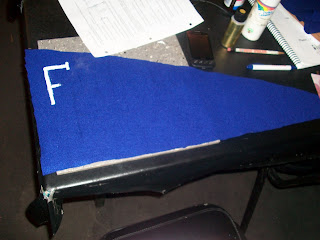 (Using felt and white paint, I created our "school pennant".) 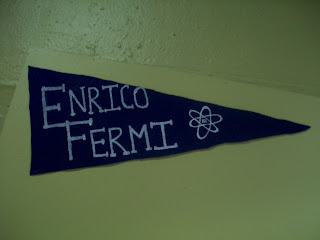 (Ta-Da!)
Since the High School is adjacent to the towns Nuclear Power Plant, it wouldn't be complete without a few of these... 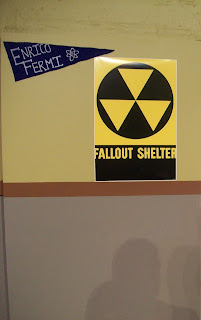 (This more beat up fall out sign is hung on exterior brick wall in a scene.) 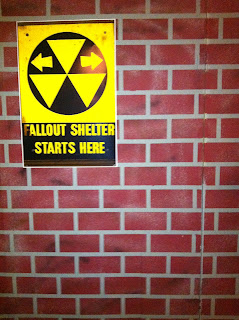 One of the neat little details I did for this show came in inspiration from this vintage public address speaker. 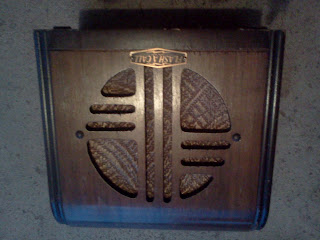 I really liked the design on the speaker, and when the director told me she wanted double doors on the set, I had a plan! I transferred the wooden inlaid patter from the speaker on to the double doors. In a perfect world we would have been able to cut out the blue areas and make them look like translucent glass, but for this production paint will do! 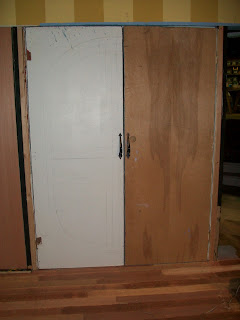 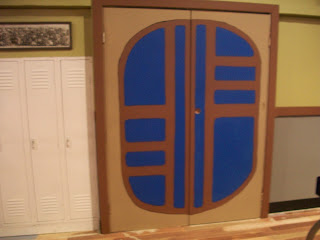 (After, and missing the door pulls) 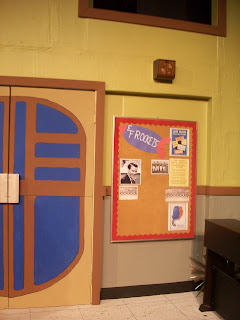 Not sure why blogger keeps cutting this picture in half, but there is the doors with the chrome "pulls" on them that Backdoor Theatre Master Carpenter Blaine made! 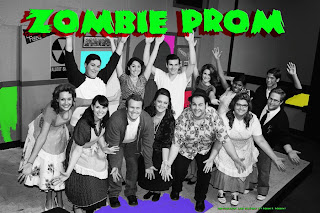 I am happy with the way everything turned out, as I said before I've been dying to do this show! It is so much fun and we've all been loving every minuet of it. I need to give a special thanks to Director Kathy Jackson for letting me run a muck on set, and trusting me thought all of it haha! Also a Thank you to Blaine-  Backdoor Theatre's Master Carpenter for letting me help on the sets.  It's always weird "playing in someone else's   playground"- but I'm glad I got to, thank you Blaine!

Glad I got to see this in person instead of just reading about it!

I want one of those fallout signs! Bomb raids were common when I was in first and second grade: