Another Opening Another Show dear readers! I have so enjoyed working on the sets of "Thoroughly Modern Millie" but let me tell you the going has been fast and furious.  Set in New York City in 1922, "THOROUGHLY MODERN MILLIE" tells the story of young Millie Dillmount, who has just moved to the city in search of a new life for herself. It’s a New York full of intrigue and jazz - a time when women were entering the workforce and the rules of love and social behavior were changing forever!

I was charged with the Stage left and stage right sets- Stage Right being the basement of the Hotel Priscilla & Chinese laundry. With Stage left as the office of "The Sincere Trust Insurance Company. 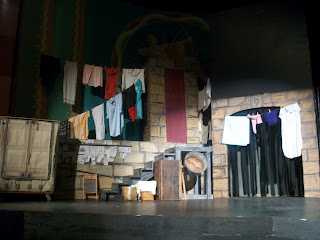 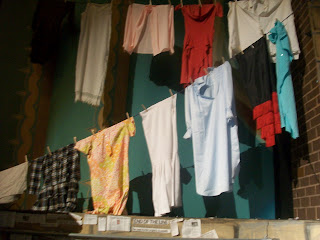 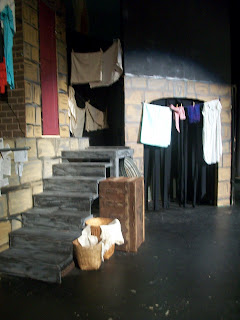 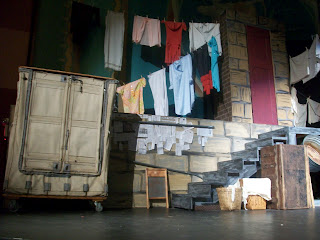 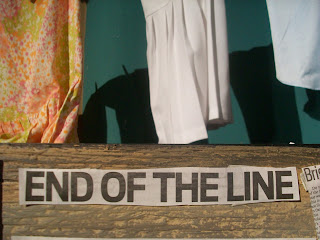 Stage right is my favorite of the two sets. Its a dark sinister place where the evil "Ms Meers" ships helpless orphaned girls off to Hong Kong to be sold as street walkers.  we also cut out several news paper clippings and taped to the "wall of infamy" (all the missing girls that have been sold.) I created the brown stone walls of the basement with layered paint effects and it turned out rather well. I used a dark brown base, then used a paint roller to roll about two foot long "blocks" in tan, then I went back in and shaded with grey and black. 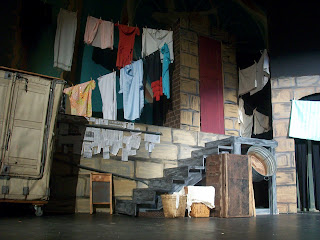 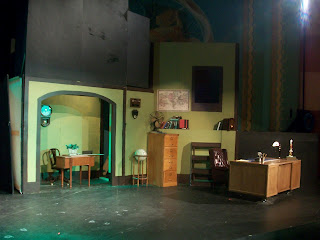 This set took a little more thought and planning, although it looks pretty simple. The style of the office was hard to figure out, the show being set in 1922 means that the "Art Deco" craze had not yet caught on. However going as far back as Victorian style would be to dated. 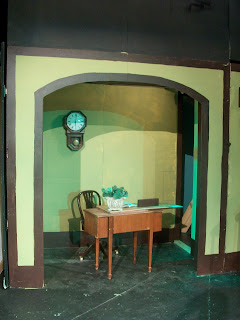 I ended up with an awkward in between of the two periods resulting in a "Progressive Era (1915-1925)" feel, with period office furniture the office received  olive green paint with brown trim and molding. going with a period 12 inch baseboard and using four inch molding everywhere else. 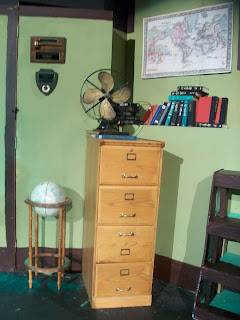 (The brass blade fan on the filing cabinet is the "twin" to mine at the lake, but its strictly in my prop repertoire) 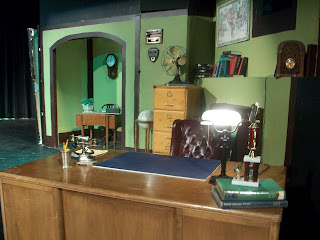 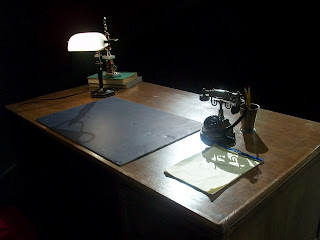 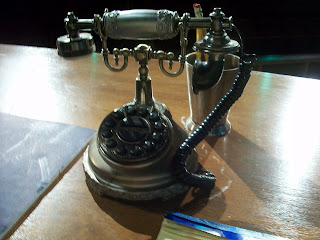 I realize this is somewhat a disappointing post, usually I have more info on the shows and all the neat things I did. The turn around time on this show from "Into The Woods" seemed like less than a week and things went quickly. One of the neatest effects of the show was the "elevator" that the girls tap dance in. I didn't have anything to do with making it but it was to cool not to share with this post!

Isn't that the coolest thing ever?!

I think you nailed the office with the wide baseboards and brown trim! And I love the laundry set. The bricks look fantastic.