Welcome to Wisconsin, Make Yourself At Home

The year is 1959, the place Milwaukee Wisconsin. 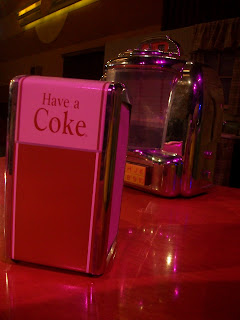 More Specifically the "Place" is Arnold's Drive -In... 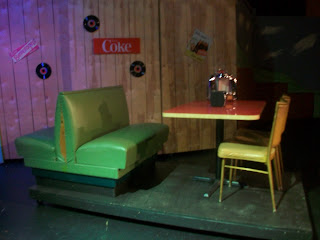 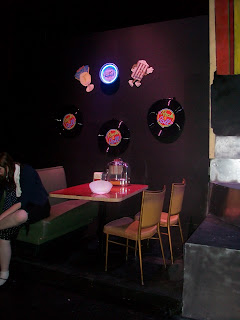 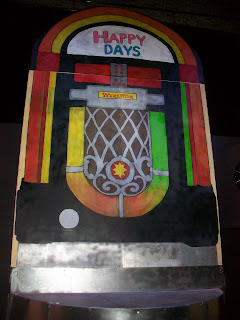 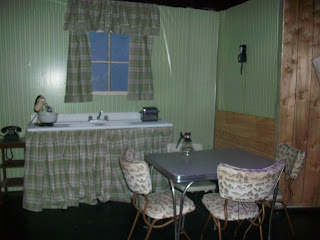 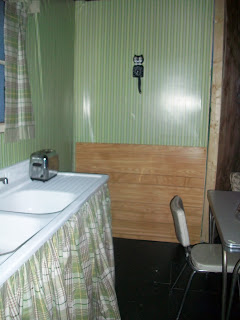 Anything in this picture look familiar?
I literally brought everything BUT the Kitchen sink (it belonged to the theater) haha! The chairs, toaster, Kat clock, and Mix Master came to the set direct from the Casablanca. The telephone and the table it sits on came from my bedroom, and the kitchen table I had in storage.
On the center stage "Arnold's set" the table jukeboxes, napkin dispensers,  ice cream glasses and retro magazines I had laying around. The neon clock and all the metal food signs on the walls of  Arnold's are formerly from the Flamingo Drive-In! (I surprised myself and everyone else when I remembered they were just sitting in the trunk of my car) 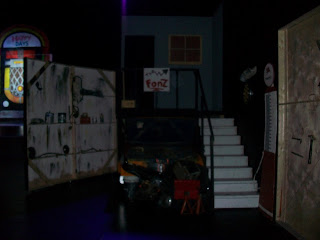 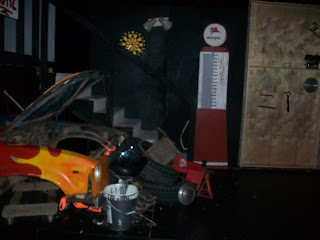 Stage left Fonz's garage, I brought some 1950's oil cans, crates, hub caps, a wrench,  the fender from a 57 Chevy Truck, the red Exxon gas pump (It used to be on the side of the Casablanca), and Old coke carrier, the dart board,  Light fixture ( Hey Keith does it look familiar? Told ya i'd find a place for it!)  Everyone worked hard on the sets and it REALLY shows!

It doesnt look like Happy Days is going to get a video Promo, but heres some footage of the "Dial Tones" ( Richie, Ralph, Chachi, and Potsie's singing group)  warming up in the alley before the show.

We opened Friday night and everything was spot on, the energy was through the ROOF! Laughs all around, I really love playing Ralph Malph because I can get away with almost anything on stage and people laugh! Anything from looking at the center fold in a Marilyn Monroe Life magazine,  putting Potsie in a 'cheek lock hold', slinging my Date fro the big dance comically around the floor, even turning tail and running from danger.  Apparently I have a knack for being funny?! ( And I must admit I like making people laugh) However my two favorite parts of the show come at the end of act one, The Big show stopping dance contest and the start of act two  where Ralph, Richie, Potsie, and Chachi do a number called "Run". (Where guys learn that 'sometimes a little bit scared can be a good thing.')  The opening weekend was a success... unfortunalty the reviewer talked more about the 'cheesy material' of the shows plot line and script rather than its energetic ensemble cast.
You can read that lack luster review here...
http://www.timesrecordnews.com/news/2010/nov/07/this-happy-days-may-not-be-yours-or-mine/
But here's my edited version of the review....
“Happy Days: The Musical” is a dimple-cheeked, nostalgic crowd-pleaser, a tender place in our hearts for Garry Marshall’s 1970s television series. Beloved TV series equates to, beloved new musical.

The Marshall-penned musical version of the show, which debuted Friday night at the Wichita Theatre, It’s just as original as those beloved characters, which are recognizable in the stage version.

Paul Williams’ music is one surefire hit that really sounds, feels like the catchy music of the 50's.


The Wichita Theatre has Jeremy Lynn Motley's qualities, like some very funny comical turns by Ralph (Mickey Jordan), Potsie (Sheldon Clanton), Chachi (Landon Cantrell) and the hilarious, scene-stealing Maliachi brothers (Utah Robertson and Cameron Hall). The guys of the Leopard Lodge exude confidence, The Fonz (Chris Cunningham) sports a rather impressive singing voice, the sets are wow, and the dance contest scene will get you grooving.

This definitely is an ensemble show from a high-energy group that works well together.
In the musical it’s 1959 Milwaukee, and Richie (Bryson Petersen), Ralph, Potsie, Chachi, Joanie (Casey Bachman) and The Fonz are in the midst of trying to save their favorite hangout, Arnold’s Drive-In. Apparently, whoever owns the land wants to give the diner the boot and use the land to build a mall.
So the plan is this: The gang will put on a fundraiser to help Arnold (Johnny Bond) save the place. The now famous Pinky Tuscadero (Patricia Biera), Fonz’s old flame, will head into town to judge a dance contest, and then the Leopard Lodge will bring in the wrestling Maliachi brothers to challenge The Fonz to a televised wrestling match.
But alas, when The Fonz suddenly leaves town, what’s the gang to do? It looks as if Arnold’s may have to close after all.
It’s even got the pop culture references, to Denny’s restaurants and computers (one character is named Mac Gates).
It’s very cute leads Petersen as Richie and Olivia Sterling as Lori Beth — there bright spots really get this musical to the place it needed to be.

Also, the level of singing , and many of the actors were true enough to the characters they were playing
In the end, if you remember the TV series, like me, you may be  happier with this rendition of the beloved “Happy Days.”

Every word is hers.

I could go into detail about how lax she is in her reviewing, or how she puts her "reviews" are more her personal opinions, but iv never been one for mudslinging in the blog-o-sphere. What it boils down too is that she isn't subjective, but im not going to let her review get me down....

These Happy Days are yours and mine, and they are truly Happy Days!

Mick, Sounds like it was a hit to me! Some reviewers never take into account the WORK put into these productions.....without which there'd be nothing.
The set is great and the you tube rehearsal was too. Loved to have seen all of it.
Good job.
Jim

Wow, once again, Mick lives the life most of us can only live, vicariously, through you! Fantastic!

Mick, the set looks incredible!!!!! I can't wait to go see it. BTW Next weekend is gonna be awesome!

PS Your blog is pretty awesome as well!

Yay! Congrats on your opening night! Great job on the sets too. I wish I could see it in person!