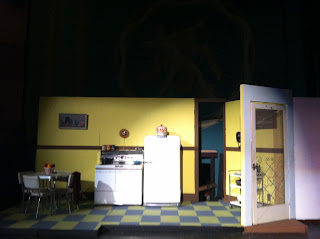 I only had a one major set in this summers production of Footloose along with a few other smaller set pieces.
My first and biggest project being Preacher Shaw's kitchen, Footloose is set in Beaumont Texas during 1984 and since the Shaw's live in a parsonage adjacent to the church I figured I would date things by about 20 years... which conveniently puts it around 1964. (My favorite, lucky me!) This project also became my "Andy Griffith Tribute Kitchen" in memory of his passing. 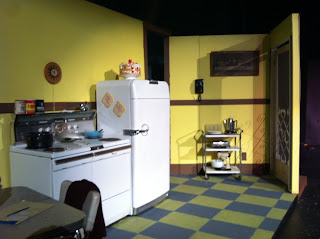 I tried very hard not to make this kitchen resemble the one I put together in Church Basement Ladies  last August.  I went with a more understated pastel color scheme. I used a light butter yellow on the walls, with dark brown wainscot and six inch base boards. 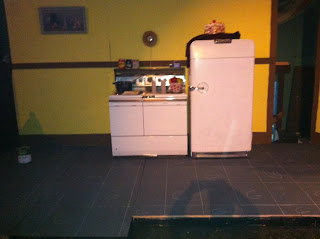 If dreamed up figured if the "updated kitchen" was from the early 60's then the house was provably built late 1930's or maybe pre-war 40's.Then on the floor I did a classic checkerboard using a medium gray and a yellowish green. The only thing that is from the prior show is the fridge, and if i had the time I provably would have repainted it too! 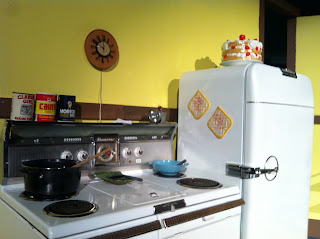 Some of the items used on stage came right out of the kitchen of the Casablanca (like the Reddy Kilowatt magnet pot holders, and about half my cutlery!) I firmly believe I could go the rest of my set designing/dressing career just doing vintage kitchens and be happy as a calm. 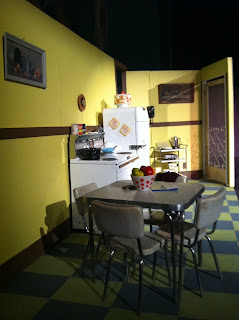 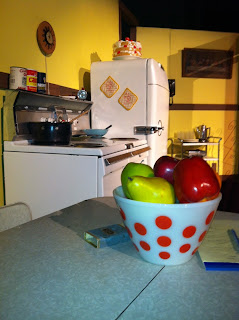 I love and try to incorporate all the little details add to a set that make it seem as close to real life as possible. 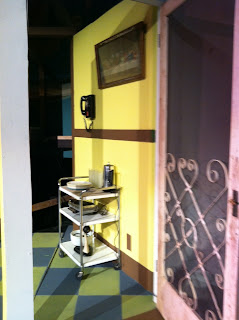 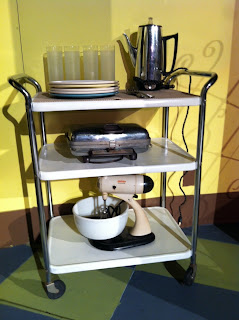 (Notice the faux painted wall plug behind the cart? I LOVE doing stuff like that!)
What parsonage kitchen would be complete without a print of "The Last Supper" hanging up? 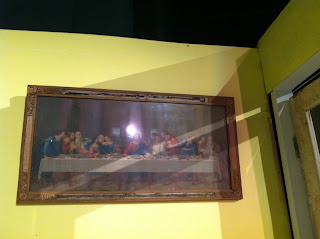 (Also from the kitchen of the Casablanca, It was my Great Grandmother Avery's.) 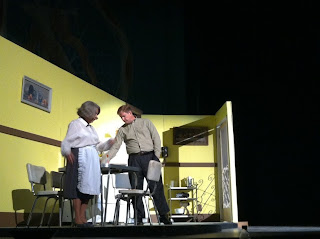 Other projects included a honkey-tonk bar. 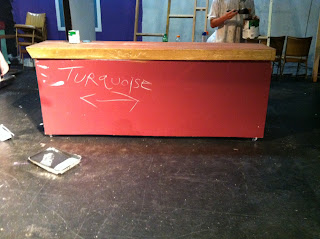 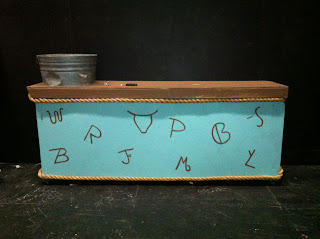 BONANZA!!! I had lots of fun making up the "brands" to go on the front. Each brand is a member of the set teams name we have- Russ, Joseph, Patricia, Mickey, Bryson, Larry, Sheldon, and the "7B" one is a favorite show of ours Seven Brides for Seven Brothers.  As much as I protest wagon wheel furniture "I will never want that wagon wheel coffee table" I honestly wouldn't mind taking this bar home after the show! Turquoise and brown themed I added ship rope for a more western feel. The galvanized tub holds the bars ice down drinks. Later I added a pair of long horns to the center front of the bar, but RATS I don't have a picture! 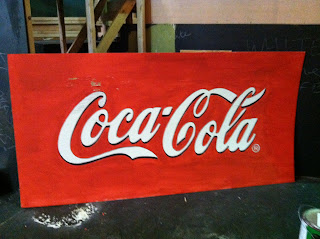 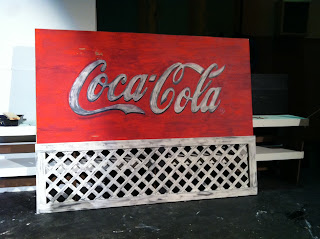 (Step 2.)
With the help of friend Sheldon, we made a lattice base for the billboard (like they use to have way back when.) I took a deeper red and dry brushed over the main part of the sign, then painted the lattice an off white and "weathered" with black paint and a sponge. 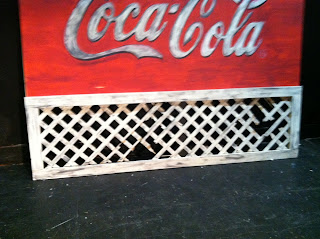 (Step 3.)
To further the distressed look of the aging Coke sign, I took a 2x4 and beat the lattice up a little bit. The finished product looks just like a long forgotten sign, one that looks like countless old billboards scattered in fields all over the state of Texas.

I had a time working on this Kenny Loggin's blast from the past of a show, and now I think I too will go 'cut loose'!

The set looks great! Wonderful job, as always. That clock on the wall above the stove looks familiar. Is that something that you got from me? (I honestly can't remember what all I gave to you at this point!) If not, I have (or had) one like that around here somewhere.

What a great looking set! I love the floor and the Reddy Kilowatt potholders and...and...and..There's too much to list. The Coke sign looks fantastic too. Super job!

cool Mick! I never liked Footloose, can't stand the song, but never knew there was a vintage themed room in it! Sorry for those fans of Kevin Bacon, etc...lol.