It's been a  HECK of a week!﻿ My little trio worked long into to bring life to Bedford Falls, but we could not have done it with out the help of the entire cast, crew, volunteers  everyone has done an AMAZING job to bring this production to life! So without further adieu, here's "It's A Wonderful Life"- according to Mick Jordan.
(The Bailey Dinning room, before) 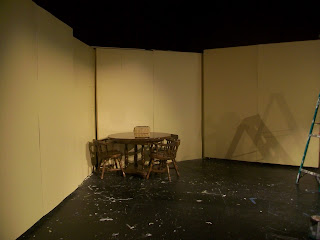 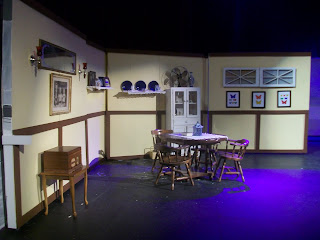 (After!)
This was the first room we worked on, Sheldon cut the boards for the wainscoting I painted a plate here, radio there a few family pictures a viola! You have the Craftsman inspired dinning room of Ma & Pa Bailey. 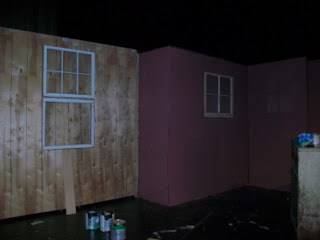 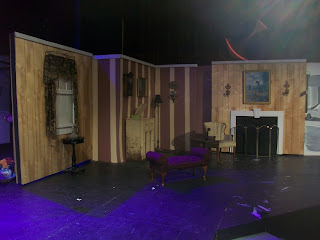 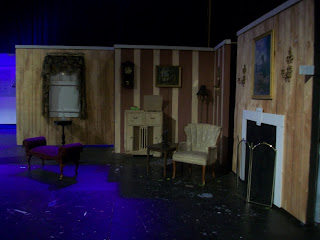 My second favortie room on stage!  This house has the "left over victorian" feel to it, to make it period we painted 'vertical wall paper' and added lots of gold and gilt touches. High lights in this room include my new $101.00  vintage candlestick telephone,and the white radio from the kitchen of the Casablanca. 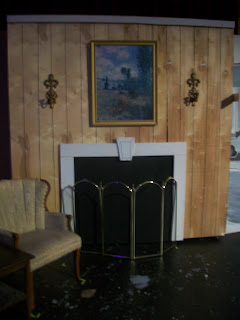 (Using 1x6 board we constructed a mantel for the faux fireplace) 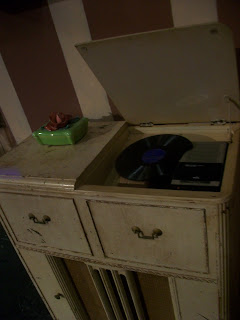 One of my FAVORITE touches to this room  is the radio. In this scene in the movie George gets mad and storms out of Mary's house, she then goes to the record player and smashes the record in frustration. So with a little rigging I've put a tape recorder with about seven minuets worth of "Buffalo Gals Wont You Come out Tonight" (recorded directly from the movie credits) when the scene starts Mary presses play and its just as if the radio were working! When she storms over to the radio she simply presses stop and smashes the 78 record hidden in the player. It  worked so well it made me giddy, and that my friends doesn't happen very often! 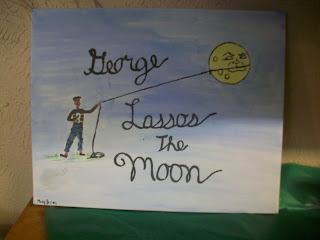 This afternoon during my lunch break at work I painted the same water color that Mary displays for George in her living room! 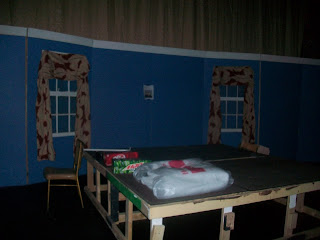 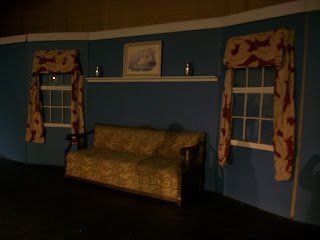 The term "Poor as church mice" comes to mind, but thats alright all George and Mary really need is eachother.

(The Bailey Bros. Building & Loan, before) 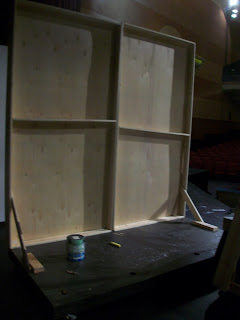 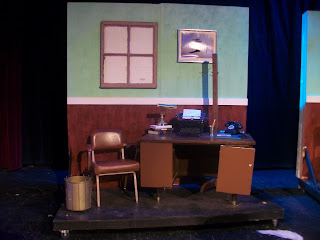 I took inspiration from old pictures of offices in the Empire State Building. It's here that George jumps on the desk and trys to keep everyone calm during the depression, which leads into the musical number "We've Got to Stick Together."
(Part 2 Building & Loan) 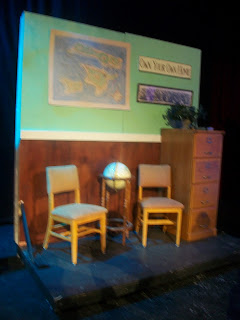 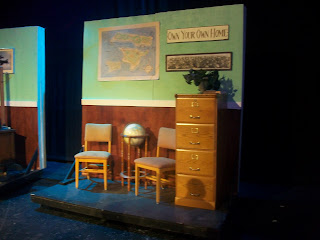 Highlights include a fabulous antique type writer, and the "Class of 1939" group photo that my Grand Father is in from when he went to trade school in California.
(The Bridge, before) 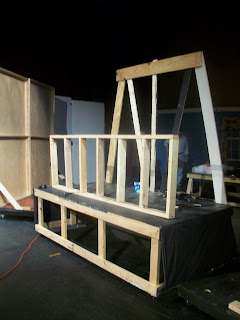 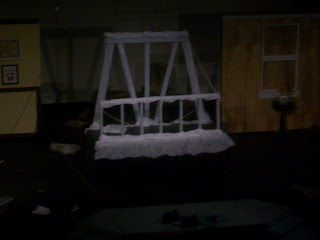 I used white quilt batting to substitute for snow, we drifted it on and around the eaves of the bridge, and sprinkled glitter so it will catch he light and sparkle like real snow. 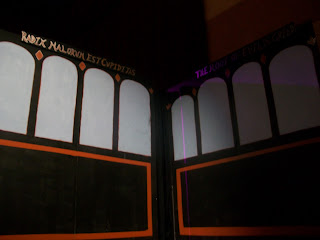 Quite possibly the most foreboding set on stage.  Note how the windows are shaped like tombstones, also written on the wall's in both Latin & English "The Root of Evil Is Greed" very fitting for Mr. Potter!

I've had so much fun working on these sets, I'm so thankful I was given the opportunity. I've loved working with the Directors Cast and Crew and I hope this might just be one show in a long line of set dressings for me! The hard work, the details, everything well its just... Wonderful.

Mick, your passion for this is so obvious through the 'work' you have done!!! Great job. You ought to be very proud, young fella!!! lol
Jim

Lots of detail there. I'm so glad you were able to use some of your own stuff as props for this show.

Your love for the past shows through in every post. The exuberance on your blog is very inspiring.

Looks good, Mick! I know that it took a lot of time and hard work, you should be proud of yourself!

Mick, ya blow me away! These sets are fantastic!