This weekend I headed out to the Casablanca for a lesuire visit! I watched "I Love Lucy" and "The Beverly Hillbillies" made a caserole and strightened up the house. Its finally back to its "Winter Season" set up (which is still pretty cramped and chaotic). Even though I see her on a daily basis, my mom still calls 7000 times a day haha. After a few hours she calls again "what are you doing?" me: "nothing" Mom: "That inst normal for a 19yr old boy... to be home laying on the couch watchign I love lucy on a satuday night...." to which I reply "And When have I EVER been normal?!"

I feel i shouldnt be Showing this picture to you, seeing as how the room is not offically done yet. But this is mostly it, minus some curtians,  a light switch, and a rug under the table.  I got the general "Feel" from Mary Deluxe's Living room. (Go look at her pictures, its to DIE for!)  but until I get them up heres a tiny (and i must admit the better part) of the "Before and After" this side of the Room changed drastically in the last 2 months. (I discovered those 2 windows had been sheet rocked over, some time ago) \
Before: 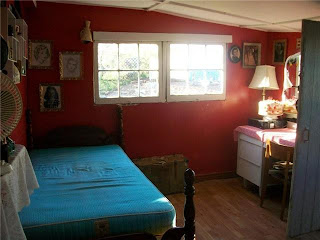 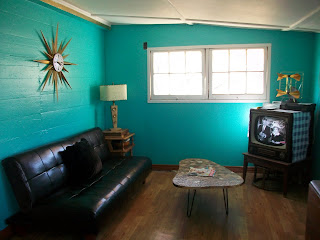 I must admit, it feels a lot roomier! Before the Tv was out in the lounge and some what open ot the weather, now it will be great in the airconditioned den, I can now watch TV in bed! (a luxury I realise very few people had in the late 40's let alone the 50's. I dont even think the president had a television in the bedroom then! And in COLOR too!)  I am however keeping the "atomic furnishings" to a minimum, because I still want the house to flow together. Im proud, I like it ... I need some stuff to hang on the walls (Alot of my old pictures I put away for a while) This has most deffinetly been a 'Mickey Jordan Production'! Id Like to thank my friend Dutch, he framed the window for me!

Well what do you Guys and Gals think?!

It looks fantastic! I love the color, clock, furniture and that very cool television. Give yourself a big old pat on the back Mick. You deserve it. Thank you so much for the postcards of the Casablaca. That was so sweet of you. They are sitting propped up against my computer and I smile whenever I look at them. Tell your mom "normal" is not always a good thing. In fact she should be thanking her lucky stars. She sounds like a cool mom though.

looks awesome, i love everything

Yet again you have showed such a flair for design--I love that wall color. Oh how boring to be normal, don't you think? I hope no one EVER calls me that, which I doubt what with all these tattoos.

Chickens in the Basement said...

Love it! The color is great, the boomerang table is fabo!, the clock atomic perfect! You have done well.

I simply adore that wall colour! You did a really great job on this room. :)

So snazzy! The color is fantastic... and I'm extremely jealous of your television set. I found a similar set a few weeks ago at one of my favorite thrifts, but it was already sold. The horror!

Thanks everyone! I'll be posting more this week! Cindy, Isnt it the greatest?! My great grandparents bought that RCA 19" in 1953 to see Lucy have Little Ricky! I found it forgotten in my grandparents barn, revamped it and now its a household staple at the Casablanca!

WOW! I covet your room. Truly sweet it is.