So much for and from Kansas

Yeah, the lack of picture posting has sort of killed my "reveal each day from Kansas Mood..." Im at my sisters place using her computer so we can have pictures.
I got several things,

the first 2 seasons of I love Lucy,
Im also Sooooo thrilled that for 2010 my house is "IN" 100% just look at Targets spring/ summer color pallet! 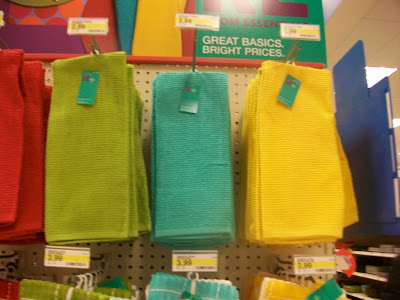 Can I pick em' or what?! AND i'll have you know I picked my colors 4 years ago. Target you may thank me at any time, haha.

A few days later I learned "Good things come to those who, take freezing walks to off the road antique stores."
Way down the road from where I was staying was this old antique shop. Being on the hunt for a Starburst Clock, vowing to scower all of Kansas to find this clock I thought it was worth a shot... I go and and the proprietress informs me that she does not have such a clock, that she specializes in "Victorian and Early American pieces". However after the FREEZING walk I was not going away empty handed... 2 rows over I spot these beauties in ALL there 1950's Glory! 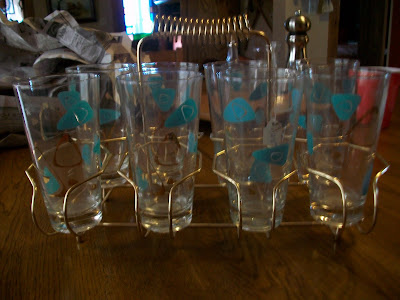 Yup a whole set of 8 with the gold carrier! Just like the 2 from Joyland, I tried VERY hard not to let my eyes pop out of socket and asked how much? The Lady says $28 I said "How about $25?" and Just like that they were mine!

In other news,
Carmen Miranda has Found her Place High atop Radio City....well my radio console anyway. Haha! 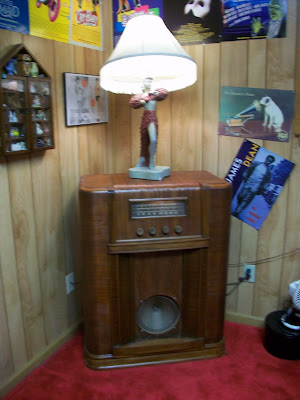 And Today I hit the MOTHER LOAD of 45' records! 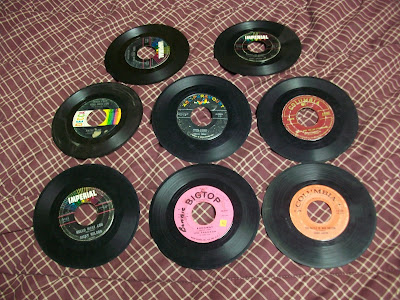 In the basement of an antique store, There was a dusty Rubbermaid bucket FULL of 45's My friend that was looking around Whit me kept looking but I sat on the floor and started going through them, in the first pile I found the 8 that I bought!!!

Here's What I found.

Well in the near future There will be a big reveal about the Den and bedroom, were almost finished! Until I get my lap top and this 'picture' problem figured out i'll have to keep bribing my sister.

Wow! Look at you! I really love those glasses... I refuse to use anything else when I come to visit.

Glad to see you were able to post pictures using your sister's computer - now at least you know it most likely isn't a blogger problem...time to look more closely at your laptop.

Chickens in the Basement said...

Love Patsy! Hope you have a good record player! The glasses are beautiful, too. That is my favorite color of blue.

I just noticed that it looks like your antique console radio needs a new grille cloth - I get mine from this site when I need one for a radio I'm restoring:

Michael, Thank you for that site!!! I have dreaded that part fo the restoration, because theres was only a faded scrap of what use to be over the speaker. I will be ordering one form there soon! Have I told you that Beautiful Console MIGHT just have belonged to Buddy Holly?