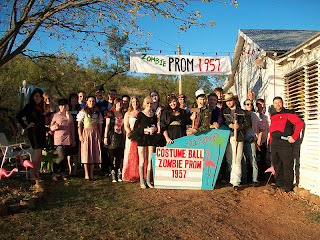 ("It's Zombie Prom, here at Mick's")
Well readers it was one HECK of a party! The annual Costume Ball at the Casablanca has become one of our members favorite parties. and others talk of it as a thing of legend. This years theme was ZoMbIe PrOm 1957 so naturally we had all kinds of Zombies... 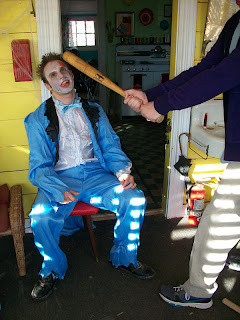 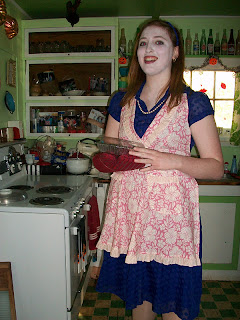 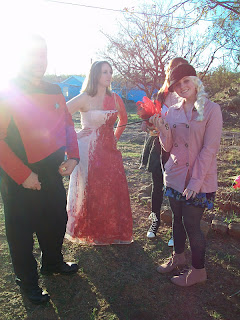 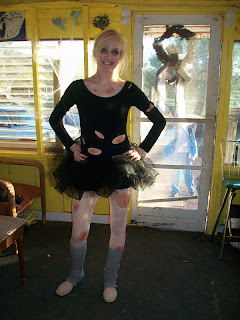 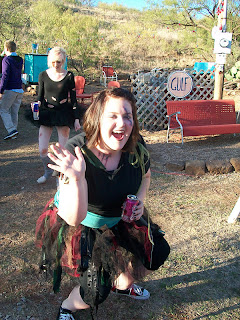 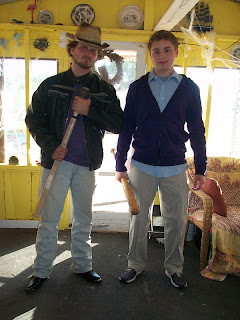 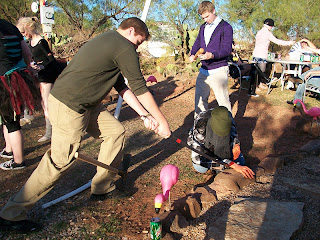 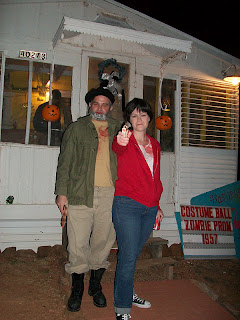 (Friends Spencer & Lara as Bill & Zoe from "Left for Dead") 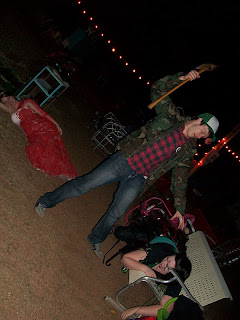 (Andrew as a Redneck/Zombie Killer) 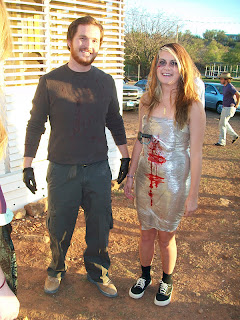 (Friends Jay-Pat & Kaeli  as Dexter and a Victim)
With just as many regular costumed folk, 30 people in all! 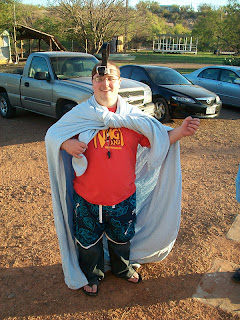 (Friend Joe as Quail Man! From the TV show "Doug") 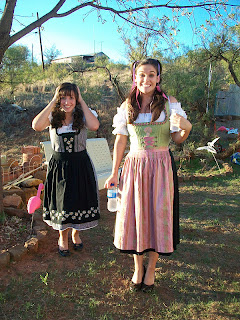 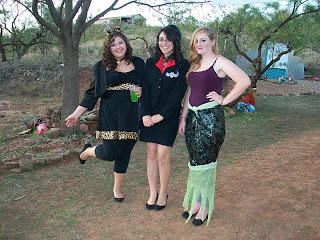 (Friends Emily as a Classy Cat, Pat as a Pan Am Stewardess, & Jenny as a Mermaid) 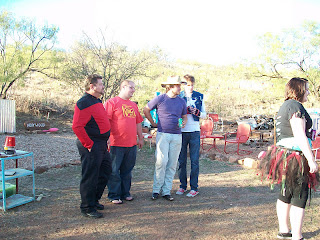 (Friend Russ as Will Riker from Star Trek) 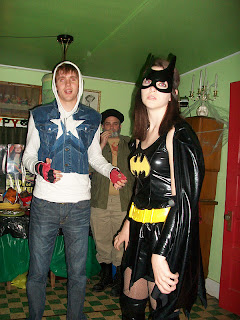 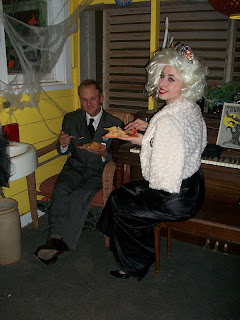 (Friends Francis and Olivia as JFK and Marilyn Monroe)
The Party was a smashing success breaking all attendance records for the year and a good time was had by all!  Everyone brought something to either throw in the coke box or to snack on one of my many projects was the punch bowls! 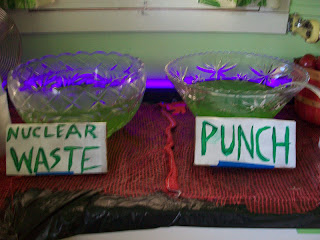 (Whats a ZoMbIe PrOm with out a little Nuclear Waste and Jello brains?!) 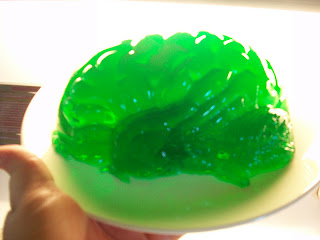 Everyone was having a grand time, posing for pictures, dancing the Timewarp and having general conversation! Everyone brought something to either put in the Coke Box or add to the Buffet of treats. Once the Sun settled in the West our Zombie Prom really got going...
Our two Feature Presentations at the Flamingo Drive-In-
(John Dempsey's Zombie Prom)
Followed By-
(Hello Mary Lou, Prom Night II)

What made these two movies perfect features is the fact that both of them have "back stories" set in 1957! (For those of you who don't know "Our Year" at the Casablanca this year is 1957)  How could I not make use of that!  After the second feature, with the help of Friend Bryson I pulled a little Halloween trick on the party guests. In the movie "Hello Mary Lou, Prom Night II) of course they play Ricky Nelsons hit recording of "Hello Mary Lou, Goodbye Heart"  every time something bad is about to happen. Well when the credits of the movie had finished, friend Bryson turned the sound off on the projector, and I put my 45' of "Hello Mary Lou" on the record player and turned it all the way up.  It took a few seconds for the guests to realize what they were hearing, but needless to say the reaction was Priceless.
With the movies squared out of the way, It was time for the highly anticipated secret ballet vote Costume Contest, along with the Crowning of our 1957 Zombie Prom King & Queen! it was so hard to choose with so many great costumes! 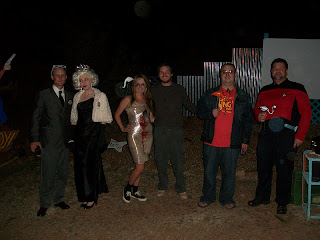 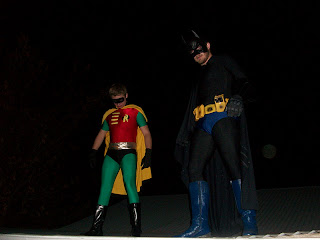 (Friends Bryson and Sheldon (after a mid party costume change) as Robin and Batman!) 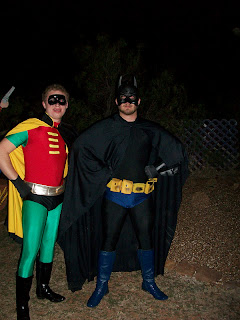 If only they had revealed themselves about 10 minuets EARLIER! they provably would have won the Costume Contest!  The three of us have been working on these costumes for almost two months now, but oh well maybe next year, they still looked really cool and surprised everyone!
After all the excitment we had ourselves a little midnight snack... 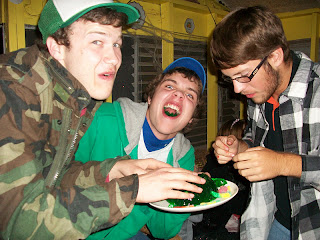 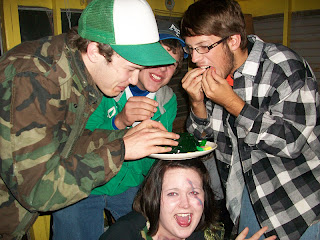 (Friends Andrew, Austin, Jarrod, & Heaven)
Yet another fabulous, record breaking party that will go down in the history books of the Casablanca! What a way to end out the 2011 Casablanca Social Season, and what high expectations everyone (including myself) has for 2012! 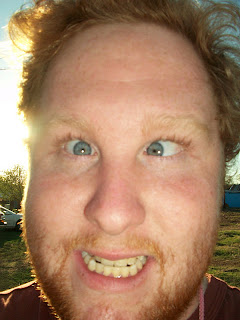 (It's enough to drive you crazy)
Now just because the Social Season has come to an end doesn't mean were done, stay tuned faithful readers.
-Mick-
Posted by Mick at 8:47 AM

OHMAN!!!!! This looks amazing. I really wish I could have been there. At least we will be there for Christmas is all I can say!!!

What? No Monster Mash-a-thon? Looks like it was a lot of fun!

But wait...where's YOUR costume Mick? I now know how hard it is to be the host of a party and get pics at the same time...dang near impossible! Your night looks amazing! I'm so glad you had a big attendance! My zombie party was much smaller and way less people dressed up. Maybe I need more cool theater people as friends! I guess my friends are too cool for school! I'll get the very few pics I managed to snap up over on IHE soon. HAPPY HALLOWEEN!