My Evening In The Twilight Zone...

I have several favorite episodes from The Twilight Zone, one of my top favorites  being "A Short Walk" where an overworked, business man takes a short walk down an old country road, and finds himself in the early 1900's of his child hood. Much like the gentlmen in the story I too was about to stepover into The Twilight Zone... dun dun dun!
Saturday the cast of Pirates of Penzance held our first fund raiser for the show! 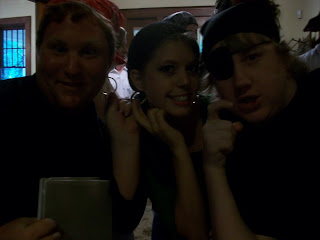 It started out like any other day... actually NO, no it didn't. Saturday morning I had to get up and help my dad put the new roof on the dock, and Now my sunburn, Irish Tan is now radiant, as one cast mate said "perpetually blushing". haha!
The fundraiser was to be a party, where the cast would sing 5 songs and just be all around piratey for the guest. ( Be dressed as Pirates talk with English accents.)   The house the party was to be given in was on 1500 Grant street, and for some reason that adress seemed familiar to me.  When my friend and I arrived at the adress much to my SHOCK, It was the very same house I went to an estate sale at a few months ago! 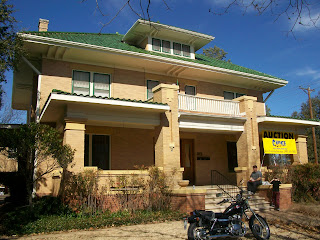 Just imagine this, but with pirate flags everywhere and a gang plank sticking off of that balcony above the steps and THATS where our party was 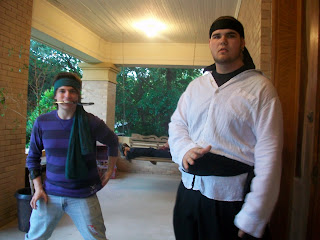 (Here we have Fredric and the Police Sergent)
I was so excited, the people who bought the house took it upon themselves to match the decor to the period of the house, so everything inside is as close to early 1900's furnishings as possible!  We showed up at 6:00 and our pirate cast assembled! 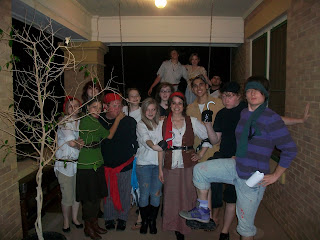 (Im the 3rd pirate from the left side, wearing black and red)   As the evening went on, we preformed 4 songs from the show,  including "Modern Major General, Ruth's Song, I am a Pirate King, and Poor Wandering One." with an additional jaunty pirate tune!   I did really well with the Major General's song until I COMPLETELY BLANKED on the last 2 lines, but everyone did very well and we struck up a lot of interest in for the show.  It was very easy to stay in pirate chracter in this house, (the show Pirates of Penzance was written in 1879. With this house being early 1900's in every way it was just perfect) Each of us preformed our songs in the receiving hall of the house to guests sitting in both the formal parlor (where the grand piano was) or in the dinning room. 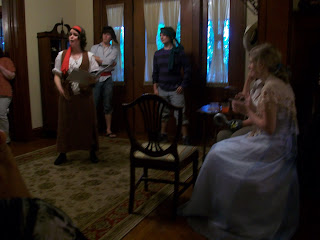 (My friend Kelcie, preforming "Ruth's Song")
I couldnt help but think of the scene from "Meet Me in St Louis" where Judy Garland and her sister throw a party and the guests preform for everyone in some way or another and leads into the dance number "Skip to My Lou".  It was a lot of fun, and it helped us get started on the some odd $8,000 it takes to put on a show.
However the real fun was after the party ended, no one went anywhere! We spend the next 2 hours in the formal parlor and receiving hall singing and dancing to various show tunes played by our music director. 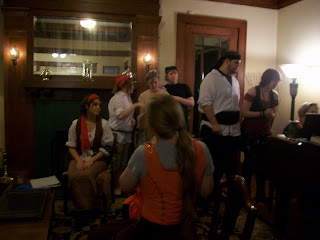 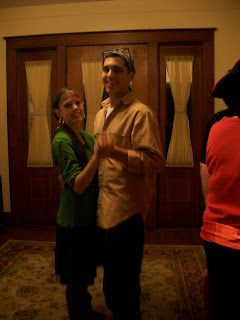 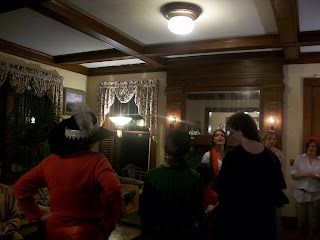 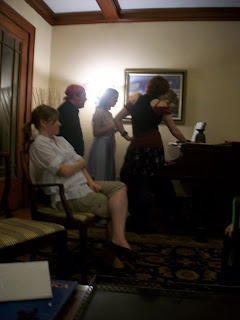 Our very kind and gracious hostess finally broke us up around midnight, and we all reluctantly went singing out the door.  I realized with the combination of the the beautiful house the party was given in, the good friends attending, and all around magic of the evening that THIS is how I want my life to be :) maybe not all the time but eventually, its something to work for.
As a result of this night, I am not also looking for a small piano to buy and bring to the Casablanca, and ALWAYS have sheet music on hand!  Tuesday I will share with you with the tale of  'Dock reconstruction' and the 78 hour NIGHTMARE that ensued!
-Mick-
Posted by Mick at 11:12 PM

I TOTally AGREE with you about having a life like this! You can create it, you're young and talented! So glad you will be in this show. It seems to suit you ! Zootsuitmama

You always have so much fun!

Mick, that coincidence could only happen to you! That must have been a really fun night! I have a buncha 45's I wanna donate to the Casablanca, can you write to me with your address? Thanks! octopusmoustache@gmail.com