To say this show didn't sneak up and catch me off guard would be a falsehood... 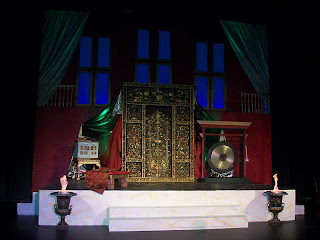 (The King of Siam's study, circa 1863)
The Kings study is a massive 2 story set that about 98% of the show takes place in, the Golden guilt door is the highlight (on loan and costing $1,600), as are the windows that have lights behind them that change colors, friend Joe found the gong and built the stand.The chest you see in the left of the picture I made from two other pieces of furniture and the Scenic Artist Chris painted. 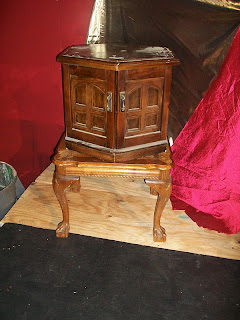 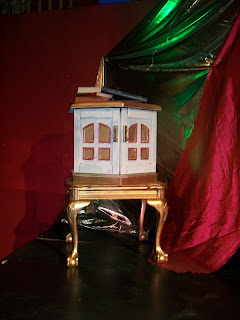 It took massive amounts of work from everyone to get this set done, it took the collaboration of Mr. Jackson, Mr. Sanders, and Myself to arrive at the finished product.  For this show I mostly did props and paint effects, one of the many things I pulled out of storage was this trunk. 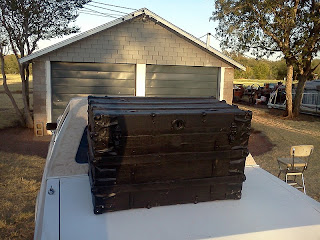 I pulled this trunk out of a dumpster during the lake Diversions "Clean up days" is was in really bad shape, so I fixed it up and painted it black. Later the neighbor lady comes over (I thought to ask for it back) and tells me that her husbands Great Great grandparents brought this trunk over to America with them when they came in 1850! 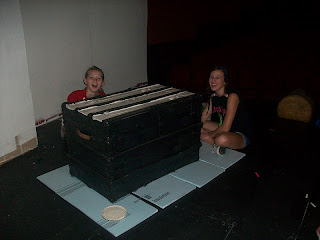 Because the stage is black, I repainted the trunk with a period color scheme and it looks great! 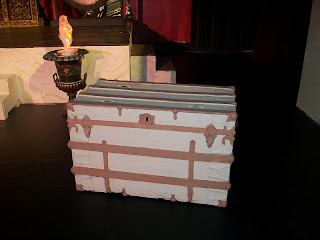 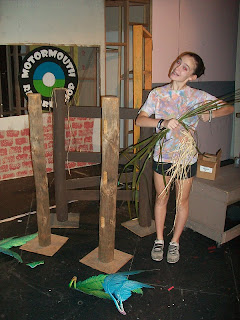 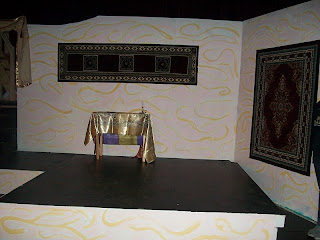 For the side stages of the "Palace"  I used a marbling paint effect with a white base coat, gold veining and soft pink undertones. It took a few tries but the finished result looks like marble from the audience. 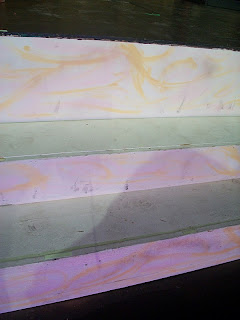 On either side of the steps in the Kings study we placed these cast iron urns with simulated flames in them, Joe Painted them to match the colors of the painted carvings on the Door piece. 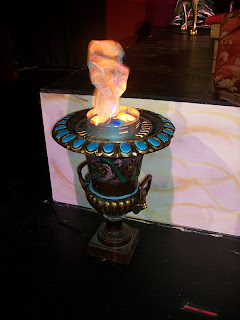 (Looks like a real flame doesn't it!)
The most tedious part of the props in this show, was getting everything perfect for the "Small House of Uncle Thomas" Ballet  I wish I could record it and show it... but ours is pretty close to this one here in the one the 1956 movie -

One of the best props I made for this scene was the Sun that I cut out of wood. 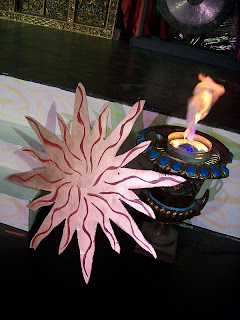 We also have a  real Victorian doll we use as the baby "George" that I will have to add a picture of later.
I made period looking parchment paper by tea staining regular printer paper... 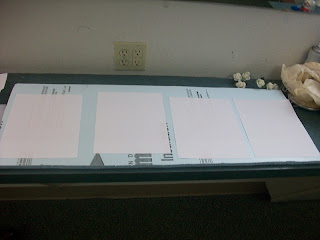 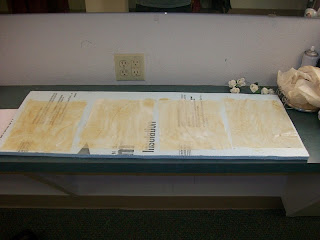 I can honestly say for the last month everyone at the theatre has been working night and day to make sure this show lived up to its elaborate roots. The costume dept resembled a sweat shop, but they came in on time and everything looks beautiful. 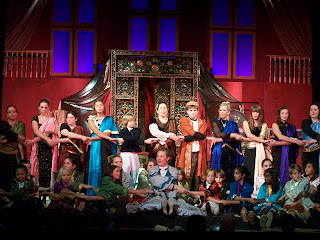 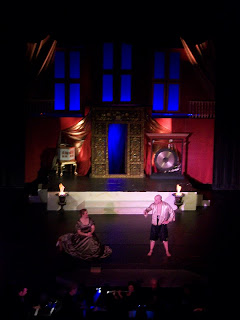 I love how imperial and ancient the Study turned out, we used all kinds of lighting and paint and special effects to make it appear as another way of life in another time.  The local paper just raved about the whole production having this to say about the sets-
"The grandeur, the glittery dance numbers, the smoke and mirrors? The historic theater loves the showmanship, and so Rodgers and Hammerstein's indelible classic, "The King and I," which opened Thursday night, is a perfect fit..."
"The musical gets its due, thanks to an incredible set designed by Mickey Jordan: a towering, gilded, elaborately carved doorway draped on one side with lush fabrics that sets the stage..."

"In Act 2, when Tuptim presents a play, her version of Harriet Beecher Stowe's "Uncle Tom's Cabin."It is the most artistic scene in the musical, complete with involved ballet choreography by Stephanie Sanders, along with masks, fabrics meant to represent waves, and snowflakes tied to the end of sticks to represent snow."

"Enchanting."
There is no way I can take all the credit for the set, I didn't design all of this one, I just set dressed and did the props but everyones efforts came together beautifully! This is the Wichita Theatre's first production of "The King & I" and with kind words like that, its enough to make you want to dance!
Undoubtedly my favorite scene in the stage play or movie - (I'm a sucker for dancing) Chalk another Production to success!

I have yet to get a picture of the Set team, but I owe a HUGE thanks to My Co-Captians Joe and Mary, along with Terrace, Katie, Ryan,  Lynn, Bryson, Chris and everyone else who came up and helped get this beast finished! These projects always seem so much easier than they are when I type them up for the blog!

*As Always if you've found these sets by a Google search looking for ideas for your production, I ask that you Please email me before using anything you see here. -Thanks*

It really comes to life once they shine those stage lights on it. I really like the range of styles and periods that your company explores! You are developing a beautiful resume!

So funny. My folks have the exact same Mediterranean octagonal side table. There's will never look so good!