Patricia and I along with friend Lizzy went to the movies last night to take in "The Great Gatsby." Visually it was Stunning, costumes were beautiful, 1920's period fans, jewels, cars, and I could even look past the obviously CGI'ed  Home of Gatsby and 1922 Long Island New York. however, in my opinion THE SCORE TO THIS MOVIE RUINED THE ENTIRE SHOW.  I fully understand they(movie makers) presented a very stylized version of the F. Scott Gerald classic to appeal to a younger and more "Gangsta" crowd, but I feel this was an ill made choice. Anywho, to end this rant I will quote what girlfriend Patricia said during the movie "You know, if you just block out that trash and play the 'Anything Goes' / Cole Porter soundtrack in your head... its really not that bad." 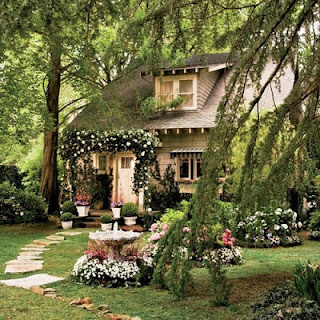 (The Humble cottage of Nick Carraway,  the stories narrator.)
This picture comes in the movie after Jay Gatsby has cleaned up the grounds in anticipation of his lost love Daisy's arrival. Picture my squee of joy instantly realizing that the front door of this 'Arts and Crafts' style cottage is precisely like the one I have collected for the back door of the Casablanca! 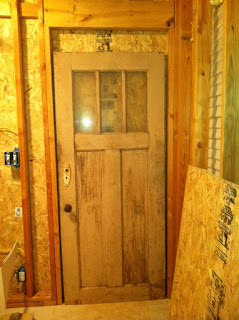 (Granted mine has a long way to go...)
I was really thrilled by the coincidence! I have searched for two years for a door like this one, this exact style. I plan to make the new bathroom at the Casablanca a little more older 1920's/30's updated to look like the 40's and this door was a MUST on my list! 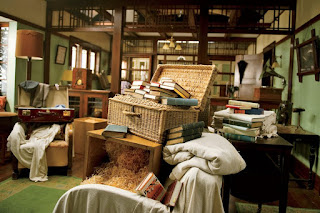 (Interior of the cottage)

One of My favorite places in the book "The Great Gatsby" is Nick's cottage. In the book, the wealthy scoff at this little shack, but there is something I adore about this humble tiny home snugly nestled in with all the rest of Long Island's Old and "New" Money. I could of happily  'summered' here in the shadow of Gatsby's wild parties for $80.00 a month in 1922. I truly loved the lavish sets for this movie, and all the little things that other people will never notice! Like how all of the doors and windows on these Long Island open out not in. (a sign of frivolous design that only they unimaginably wealthy could afford to keep up.) The beautiful brass fans that appear in several of the scenes, just about everything looked the part and was washed in the splendor and legend of Gatsby.

If only the music had been true to the actual 1920's, I would have been in ecstasy.
-Mick-

I had wondered if that music was just being used in the trailers to attract a younger crowd. To find out that it's actually the soundtrack is very disappointing. I'll probably wait till I can watch it at home now.

It's so cool that you saw your own very door in the movie! I know that just tickled you pink.

I was anticipating this movie too! I liked the set and my Mr. Dicaprio, but the frenetic pace of the beginning of the movie really lead to a long dragged out ending. It would have been fine if it was fast paced the whole way through, or evenly paced the whole way through. I do not think the music helped that fact much either. Either way, I got to day dream about Leo/Gatsby for a while!

I'm dying to see this movie and plan to this week. I have heard bits of the soundtrack and I think I really like it. Much like I liked the soundtrack to Moulin Rouge. It's very Baz. This story is such an American classic....I think it would have been nice to kept the music to the era. I saw the Tulsa Ballet perform The Great Gatsby a few years ago and it was the best ballet ever! All music from the 20's. And the male dancers wore suits instead of tights...which made the dancing so much better.

I think Leonardo is jus the best...and I do look forward to seeing the sets and costumes. We'll see what I think of it after I see it.