Well Dear Readers,
The most amazing thing happened the other night... 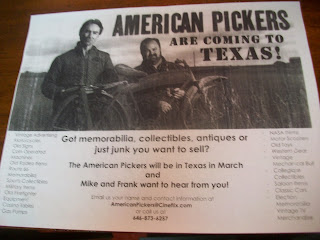 Patricia and I were working on the sets of "The Sound of Music" when our producer friend Lynn rushes up holding an autographed picture of the American Pickers he then says "You need to go to McBride's (stake house) Right Now, they are there!" The steak house is only a few blocks away from the theater, so Pat and I jump into the car (after much tripping over myself to get changed from painting cloths to street clothes) and we headed down the street. 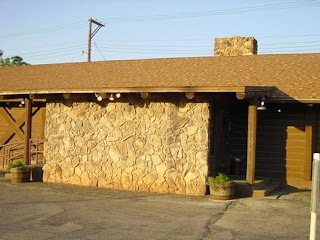 (McBride's Steak House of Wichita Falls TX)
I was just about hysterical with the thought of meeting Mike and Frank, Patricia found me running around like a chicken with its head cut off.  We run into the restaurant looking around wildly and after surveying the room I don't see them.  It is about this time the hostess approaches us and the following conversation takes place.
Hostess: "How many?"
Me: " Just two, are Mike and Frank here?!"
Hostess: "Who?"
Me: "You know Mike and Frank, from the History channel?"
Hostess: "Ummmm...."
Me: "The American Pickers ?!"
Hostess: (In deep southern/concerning accent):"Honey can I Help you?"
Me:" Are you on the level with me? Are they here and have just asked not to be disturbed?"
Hostess: "Not that I know of..."
The Hostess seats us to our table and promises to go through the dinner tickets of the evening and see if anyone has signed "Mike or Frank", I'm feeling lower than a cellar because we missed them and then the door flies open and in walk a group of people and the hostess kiddingly says "Are you famous?"  and when the head of the group replies "Me? No..." I nearly flipped over because it was Mike Wolfe!!!!!!!!
I didn't want to disturb him as Im sure he gets borderline stalked by fans everywhere, but as he passed our table I said "We love your show, and we've got a place for you to pick!" A little later he comes back over and I start telling him all about the Casablanca, and showing him pictures from the blog on my phone he said the Drive-In was "Really neat" and that the lawn chair collection was "Pretty Cool". After that he ate his dinner and promised to sign something for us afterward.  After eating a hearty meal Patricia and I got him to sign the back of our dinner ticket, 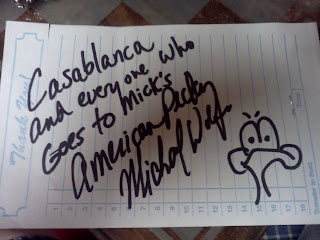 (He drew a picture of a frog on the ticket because he had "Frog Legs" for dinner.) 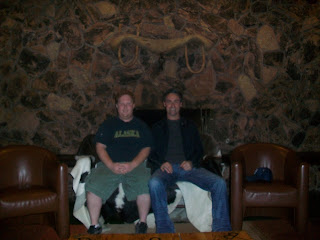 He then took pictures with us before leaving for the night! 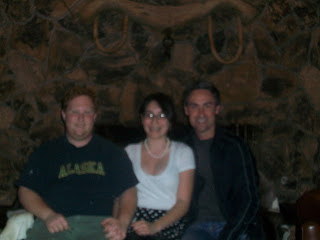 We must of shook hands six or seven times and then everyone finally left, Mike was super nice about everything and we enjoyed meeting him!  We drove back to the theater (as we had more work to do) but I was so excited I couldn't even think straight, we showed all our friends the ticket they signed and retold the story I have just shared with you about 20 different times. I've got to get a frame for the ticket and I may print out one of the pictures to go with it, it was such a cool once in a life time meeting.

I only wish I had gotten an autograph for our friend Utah, he is the BIGGEST American pickers fan (and we had thought they were going to Pick his grandparents farm, but they did not)  wish i'd gotten one for him!

Super cool! Frame it with the photo for sure!!

Way too cool, Mick! Love that show too. Maybe you just might be 'featured on the show? Who knows!

OMG! I am so jealous! :D Hehe wish they'd come pick my place- I got some rusty gold I could part with, LOL.

Definitely frame the ticket with photos! We love the American Pickers. It's so nice to know Mike is as friendly as he appears to be on the series. So happy you had the luck of rubbing elbows with him.

Wowee! A brush with fame! I have mixed feelings about those two, picking peoples old farms and whatnot, but I am also a fan of the show. I really love seeing what they uncover! I also really like it when they get chased offa someones doorstep before they can even say a word! LOLS! It would be a dream job huh? Super cool you got to meet them. I bet the next time you watch that show, they'll be pickin' lawn furniture!

Sooooo cool! Love the little not he included on the ticket. Put it the best gaudy frame you have!

OMFG thats amazing! We only have that show here on cable so I haven't seen it for a while but I still hear a lot about it.